Have you been to Disney lately?  We had a blast checking out the new Disney World attractions!  Find out what they’ve been up to… 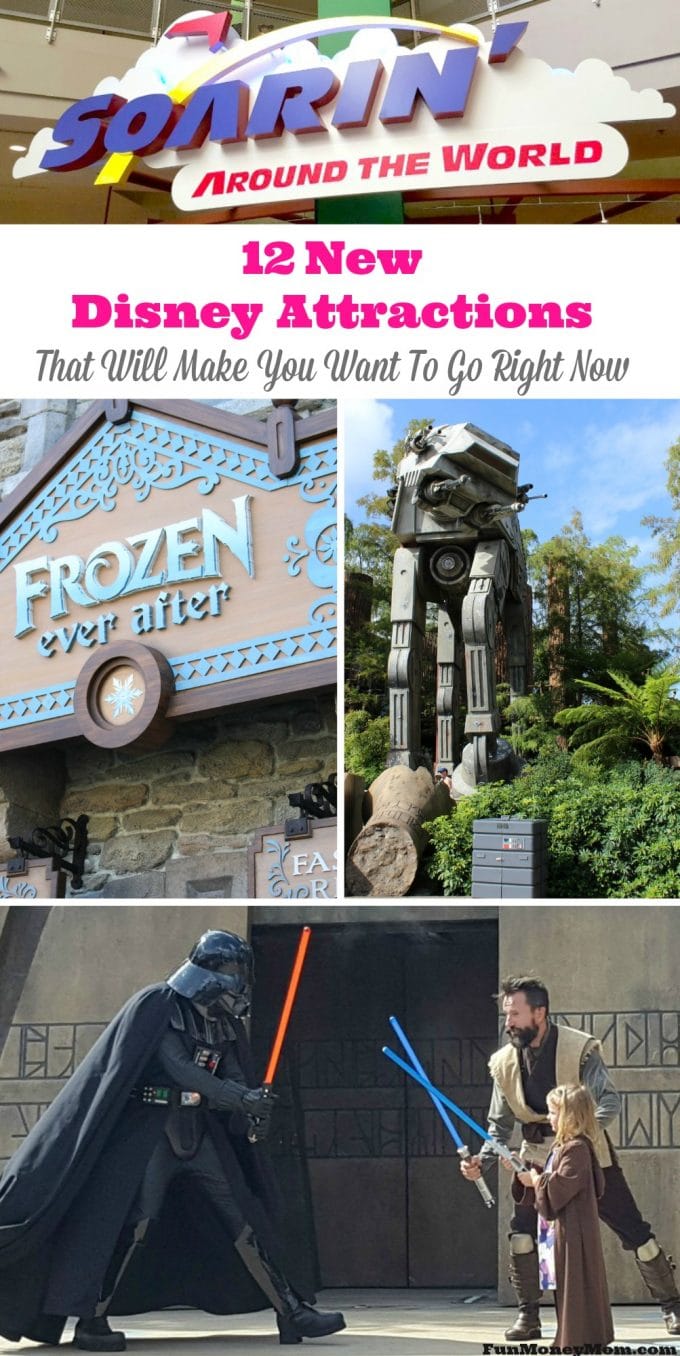 Thanks so much to Disney for sponsoring our trip to check out the new Disney World attractions!  All opinions are 100% my own.

There’s a reason that they call Walt Disney World the most magical place on Earth…basically because it is!  We absolutely love Disney and being only 1 1/2 hours away has definitely been one of the many benefits of moving to Florida.  When my family and I were invited for a visit to check out all the new Disney World attractions, we jumped at the chance.

The ride to Disney always goes by fast too.  We basically sing every princess song known to man for 90 minutes straight and then we’re there!  On the night we arrived, we checked into our hotel and then headed off to Hollywood Studios.  We were going to check out all the new Star Wars attractions.  Star Wars has always been popular but never more so than now!  Even little Keira knows all about it and she’s never even seen the movies.  We couldn’t wait to see it all.

We started our night with the Galactic Spectacular Dessert Party!  Seriously, can I start every night like that? When we walked in, we could see Stormtroopers walking around the crowd so we made sure to be on our best behavior.  The tables were filled with all kinds of delicious desserts but I was happy that they also offered healthy choices like cheese and fresh fruit. 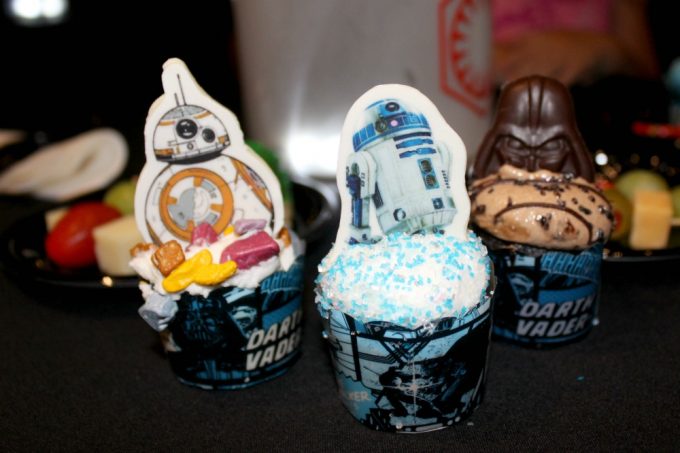 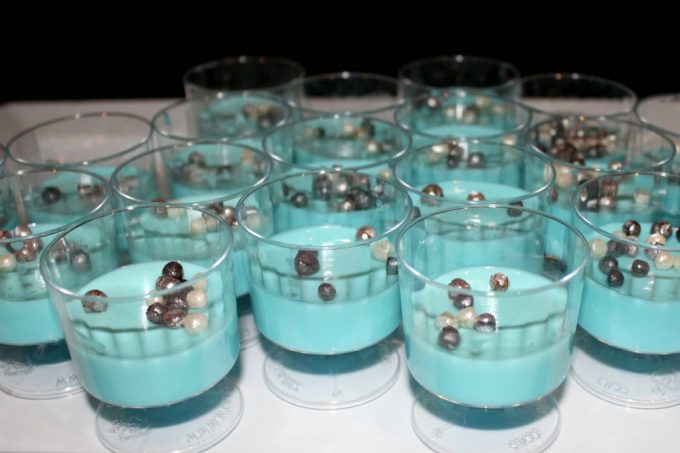 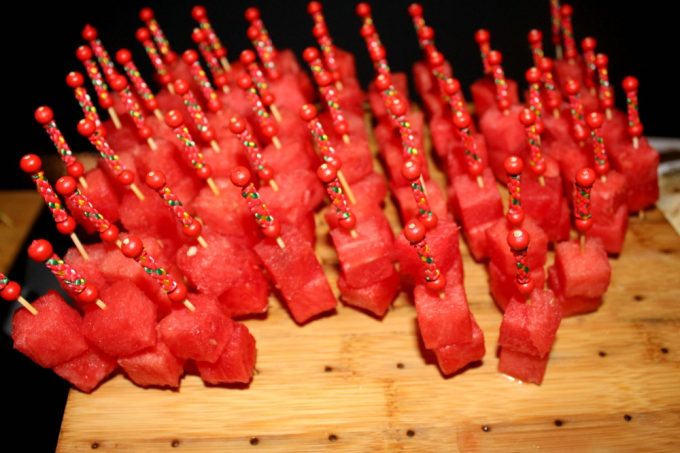 While we were there, we also got the chance to meet some of the Star Wars characters.  The girls really wanted a picture with a Stormtrooper so we found one that looked friendly, though Keira looks like she was still thinking about it. 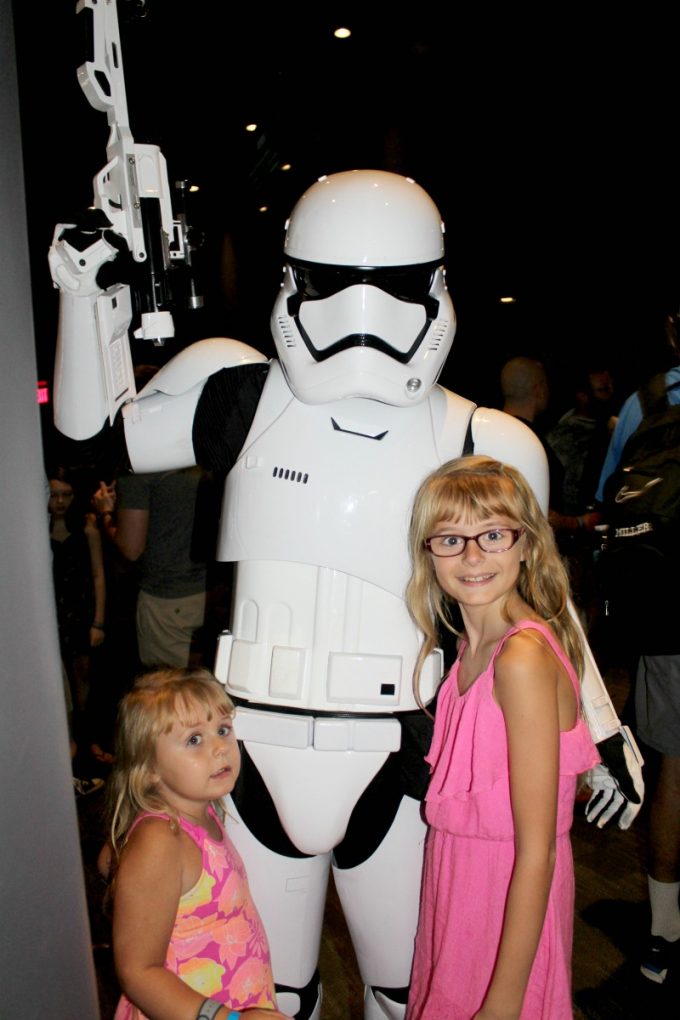 We also had the chance to meet some of the main characters from the movie and at the risk of sounding like a big nerd, I couldn’t wait to meet Chewbacca.  Yes, I know that we weren’t meeting a real live wookie but I don’t care, it was just cool!  Since Keira hadn’t seen the movies, she was a little scared at first but once she saw us hug him, she warmed up.  By the end she loved him so much that she spent the rest of the trip begging to go back and see him again. 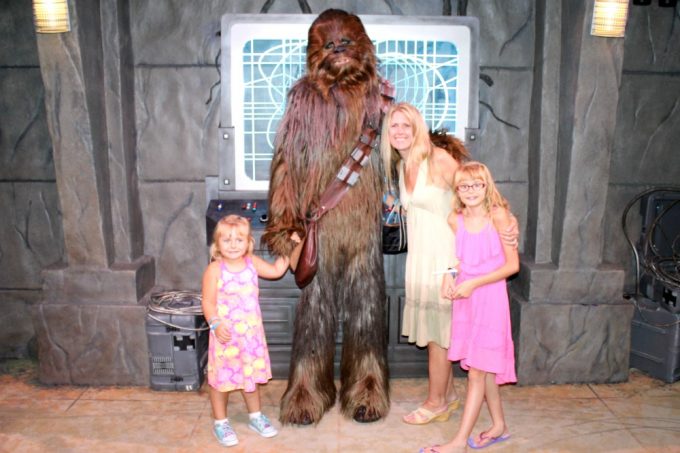 After that, it was off to the new Star Wars nighttime show, A Galactic Spectacular.  They took some of the best clips from the movies and combined them with lasers and fireworks and it really did make for a spectacular show.  It made me want to go back to the hotel and binge watch the movies! 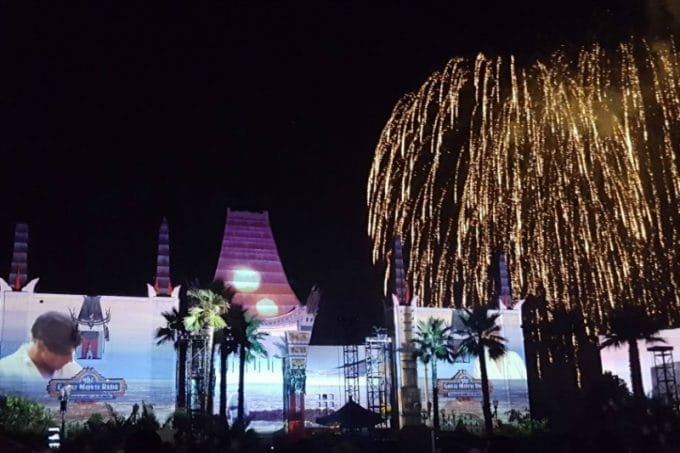 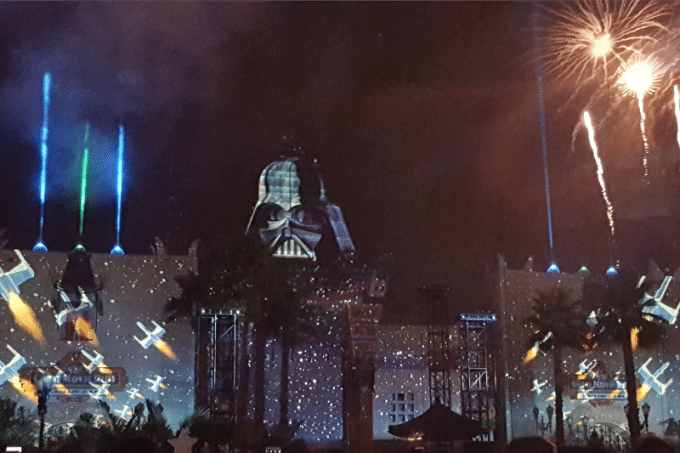 The following morning it was back to Hollywood for more Star Wars fun.  We checked out the newest edition of Star Tours:The Adventures Continue and discovered that Keira had finally reached the height requirement…yay!  The funniest part was that during the ride, they pick one person as the “rebel” and show them on the screen.  Keira now thinks that daddy is famous because he was on “TV”. 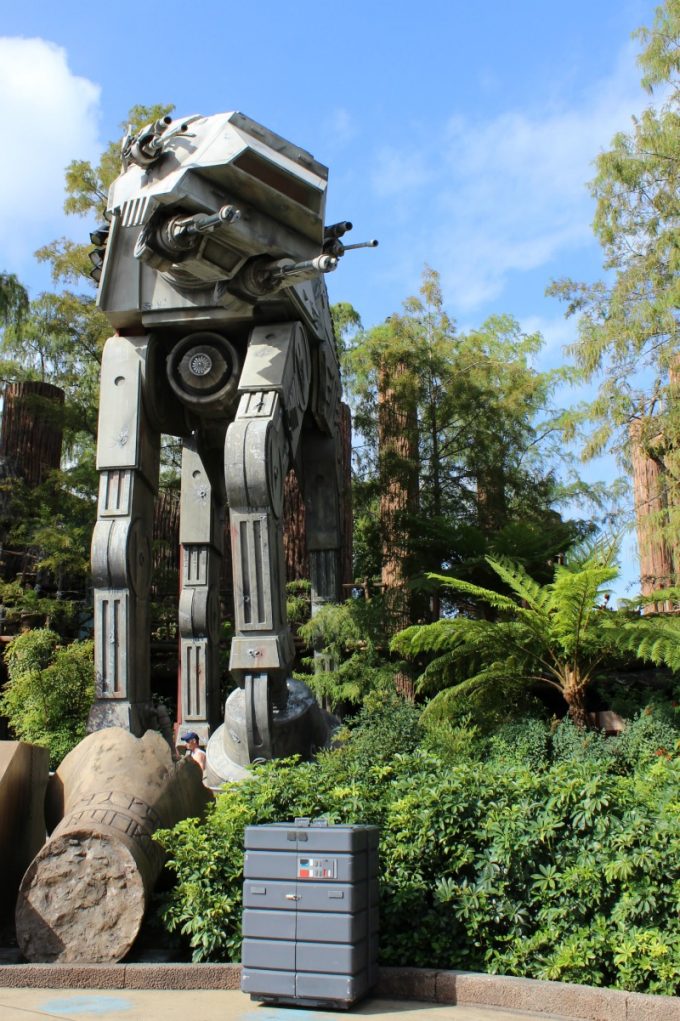 Next it was time for some Jedi Training.  They’d never had a chance to participate in the previous version so they were pretty excited.  I had no idea how Keira would react when Darth Vader actually came out but she stood her ground and loves telling the story of how she defeated him! 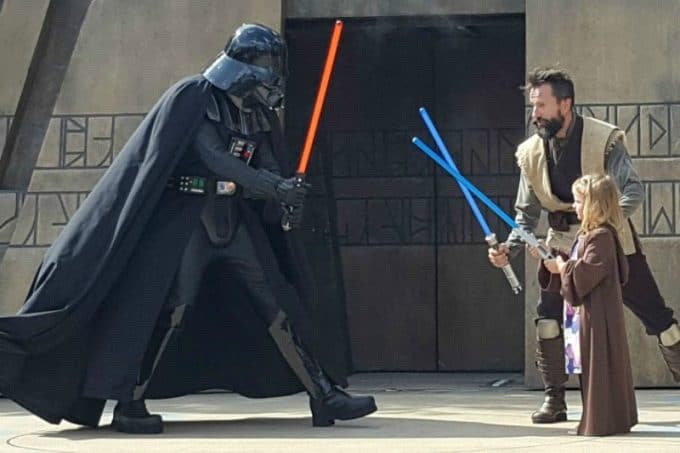 Ashling’s a little older so she knew there was nothing to be scared of.  She had a blast too and immediately wanted to do it again. 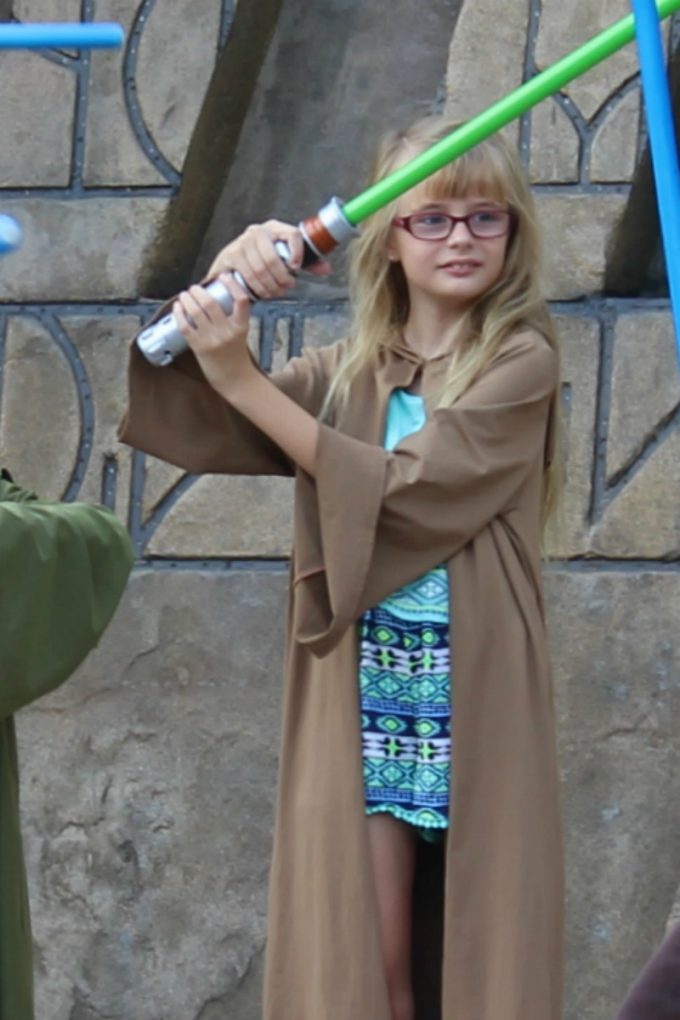 After successfully taking down Darth Vader, we went to the Launch Bay to watch a couple of short movies about the making of Star Wars.  Once again, after seeing all the clips, I immediately wanted to go home and watch all three movies.  I don’t include the middle series because I wasn’t a fan of those three.  The first three are classics that I can watch over and over and now this new series is just as amazing!

Jon and the girls were having fun acting out the parts but I think Ashling was a little embarassed.  Yes, she’s getting to that age where her parents embarass her.  Sorry Ash, you’re stuck with us! 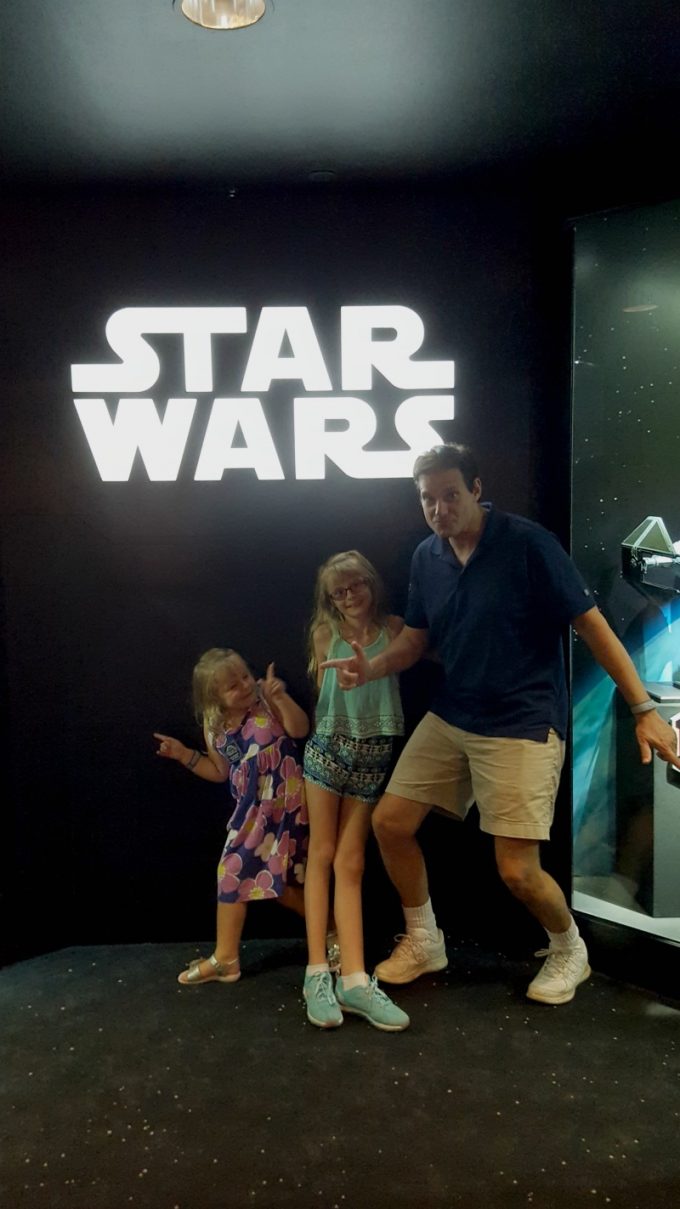 When we were done goofing off, it was time for Star Wars: A Galaxy Far, Far Away.  If you want to see your favorite characters, they’re all here in this stage show.  The crowd made it fun because they got so excited when each main character came out.  There was lots of clapping and cheering and everyone in the audience really got into it.

We couldn’t leave Hollywood Studios without riding two of our favorite rides, The Tower Of Terror and Aerosmith’s Rockin’ Rollercoaster.  While Keira wasn’t quite tall enough for the roller coaster, she could finally ride Tower of Terror.  We weren’t sure if it would be too scary for her but as soon as it was over, she begged to go on it again.  We were more than willing…we all love that ride!  Keira even rode it a third time while daddy took Ashling to ride the rollercoaster.

That night, it was off to Animal Kingdom for dinner at the Harambe Marketplace.  I love how authentic it looks!  Disney does such a great job of making you feel like you’ve really traveled halfway across the world. 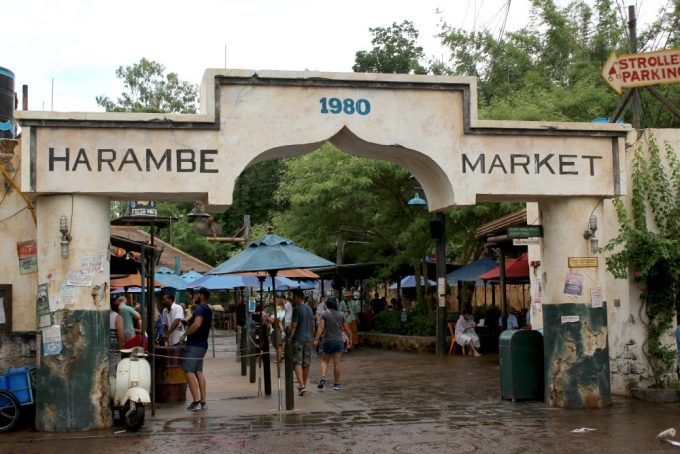 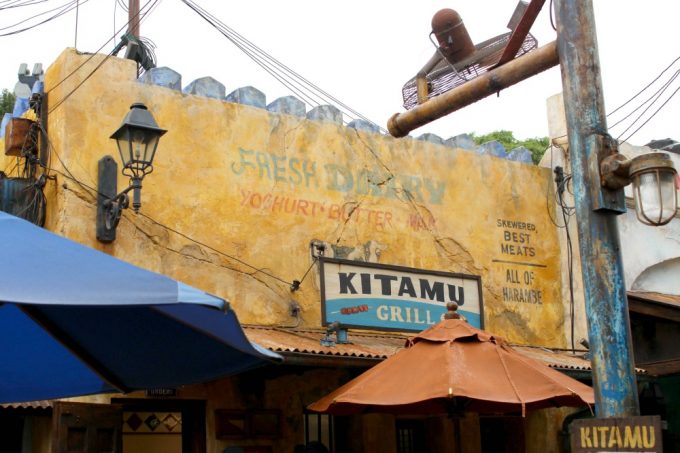 Dinner was followed by the nighttime show The Jungle Book:  Alive With Magic.  They combine live singing and dancing with special effects set against a wall of water…pretty cool! 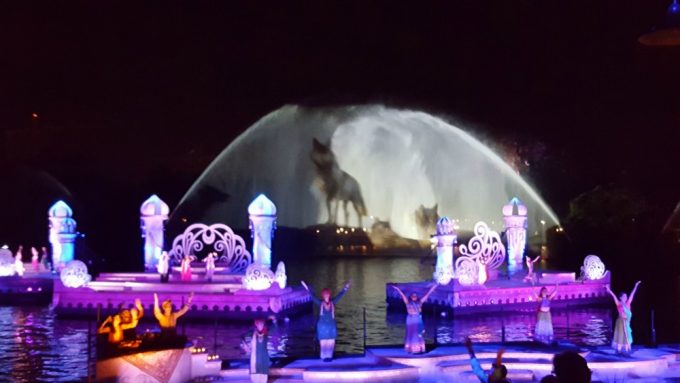 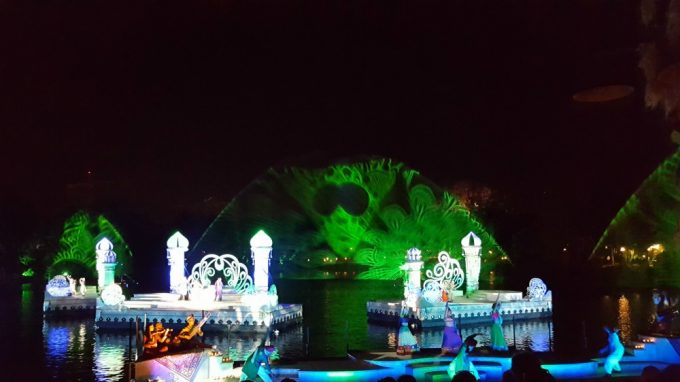 On our way out, we were able to see the Tree of Life transformed with lights…wow!  It was so beautiful and the perfect end to our day. 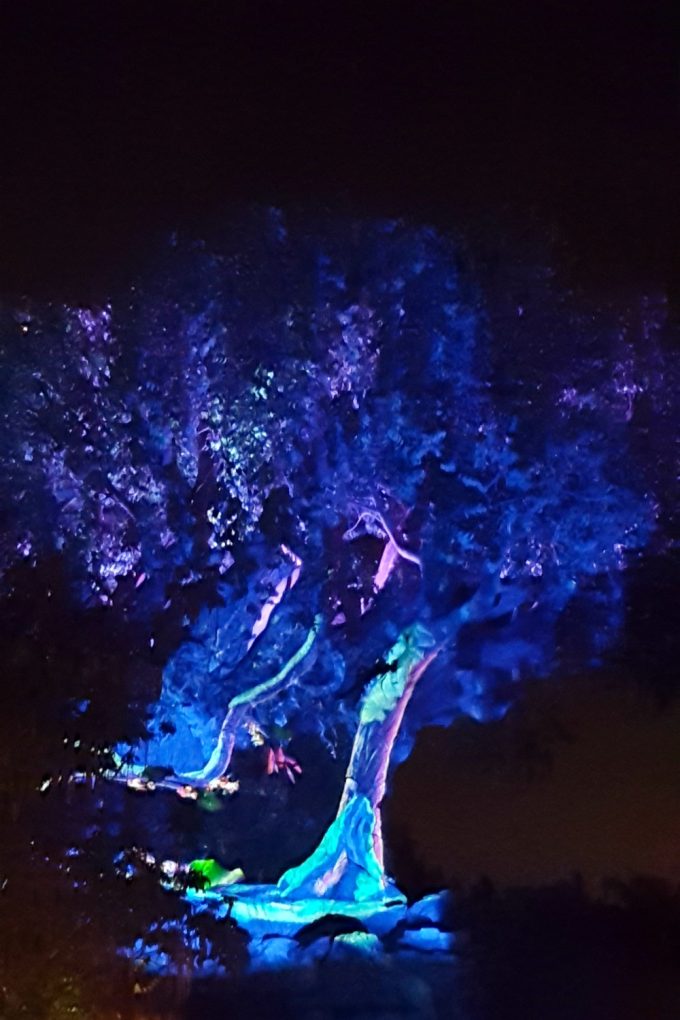 Our trip had been awesome so far but the best was yet to come.  If you have daughters, you probably know the movie Frozen like the back of your hand.  I’m not ashamed to admit that I know the words to every song.  My girls were even Elsa and Anna for Halloween last year (along with every other little girl on the planet).

Ashling and Keira knew about the Frozen ride from the day Disney announced they were building it.  Now they were finally going to get to ride it!  I don’t think I need to tell you how easy it was to get them out of bed that morning…the day had come!  When we entered, we were transported to the town of Arendelle while we waited for our turn on the viking ship.  Finally we were on board and we floated through different scenes in the movie.  It’s no surprise that my girls’ favorite part was listening to Elsa sing “Let It Go” as we rode through her ice castle but the baby snowmen were pretty cute too. 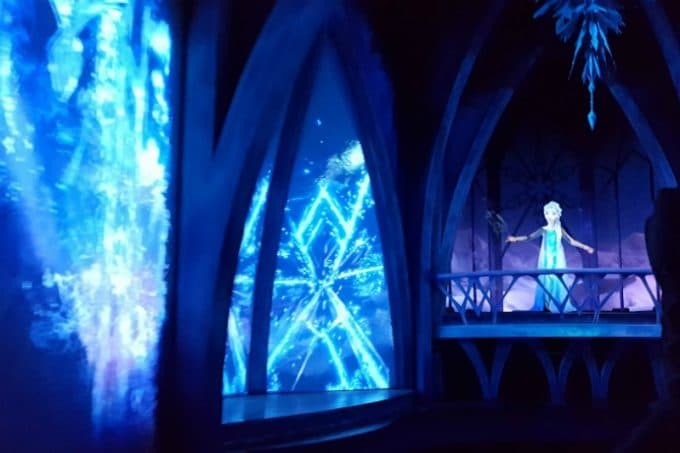 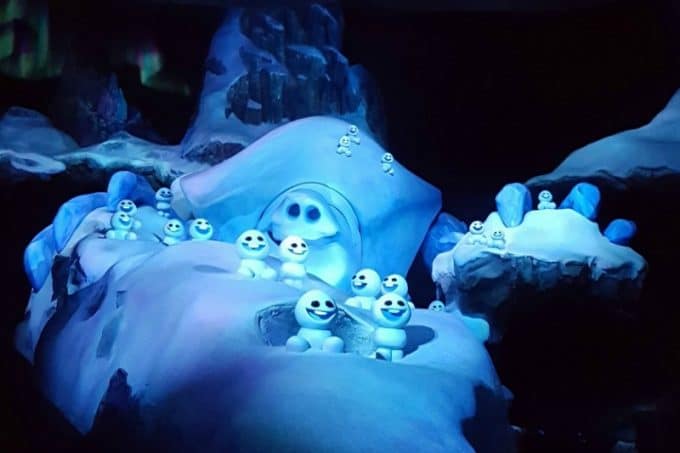 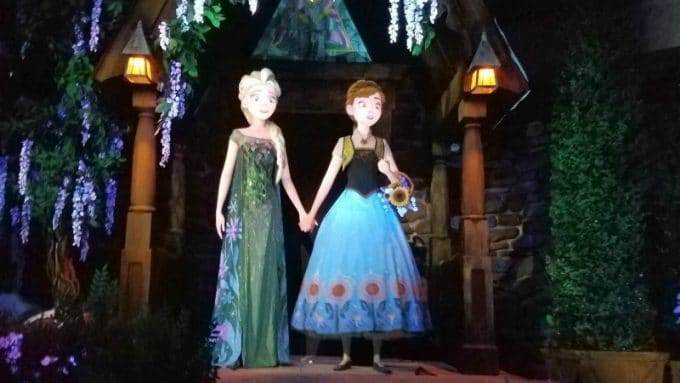 Normally it would have been hard to top this but when we were done, we had the chance to meet Anna and Elsa at their summer cabin. 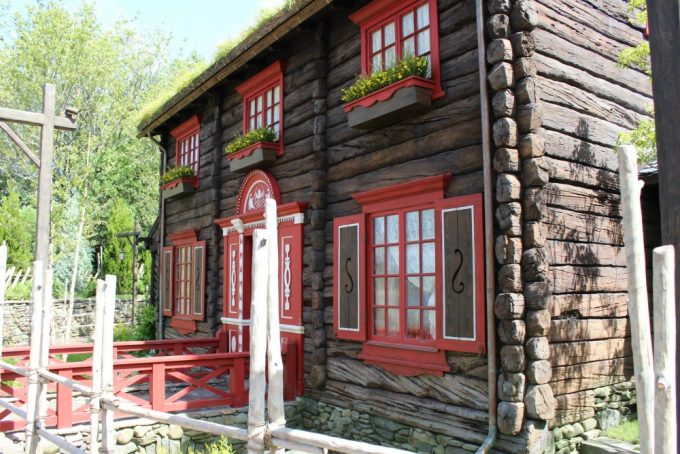 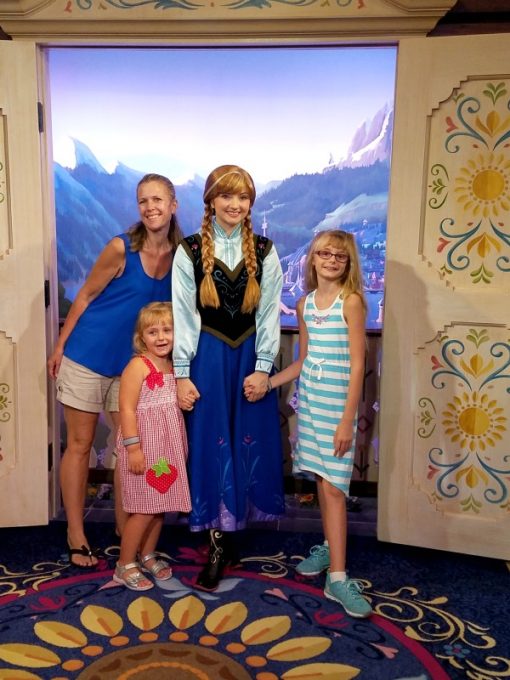 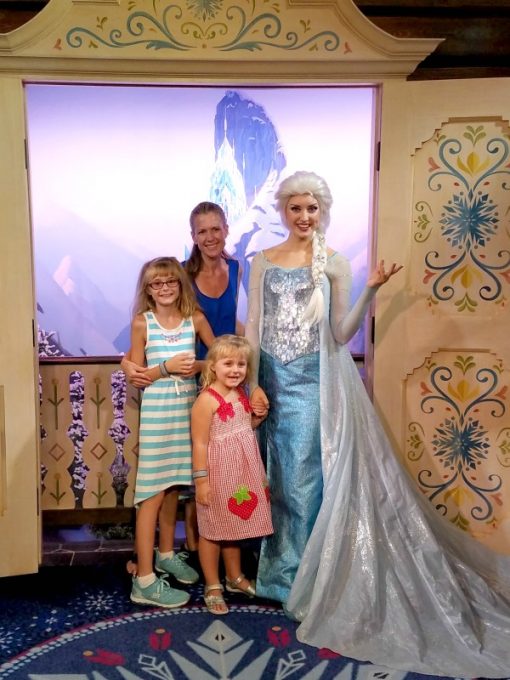 The last stop was the new Soarin’ ride.  The ride itself isn’t new…it’s been one of my all time favorites for years.  However, they’ve changed it up and now you are Soarin’ Around The World.  If you’ve never experienced this ride, it’s worth the visit to Epcot alone.  You really do feel like you’re soarin’ through the air, flying from Iguazu Falls in South America to the Great Wall Of China and beyond.  I loved Frozen and the girls will tell you it’s the best ride in the park but I’m going with Soarin’! 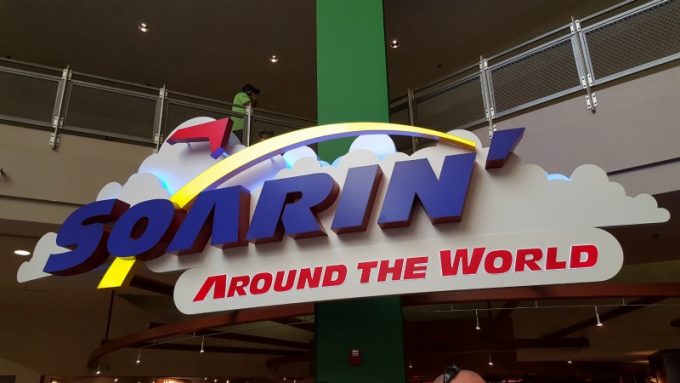 We had such an amazing time but then again, we always have an amazing time at Disney.  The best part is that there’s even more to come!  Jon and I are super excited about Animal Kingdom’s Pandora – The World Of Avatar.  That was one of those movies that he had to drag me to and by the end I loved it even more than he did.  There’s also going to be a new Toy Story Land in Hollywood Studios and you know that Disney will make that a can’t-miss experience too!

It’s not like we even needed a reason to visit Disney…after all, it’s DISNEY!  In fact, we’re going soon for Epcot’s Holidays Around The World, featuring a candlelight processional, a 50 piece orchestra and a full choir.  As if that’s not enough, Neil Patrick Harris is going to be the celebrity narrator when we go…love him!  Check back soon and I’ll tell you all about it!

What new Disney World attractions are you most excited to see?

We love Disney! Hoping to try the frozen attraction soon. We did get to do Jedi training and loved it!

Isn’t Disney the best?! I never get tired of it. I’m going back in a few weeks and will be going on my first Disney cruise this time too. I’m so excited I can barely stand it 🙂 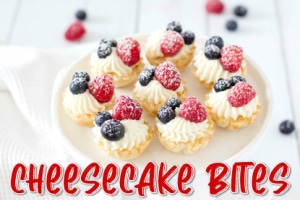 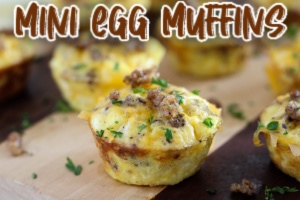