Have a London Vacation planned?  Here are some things you definitely won’t want to miss! 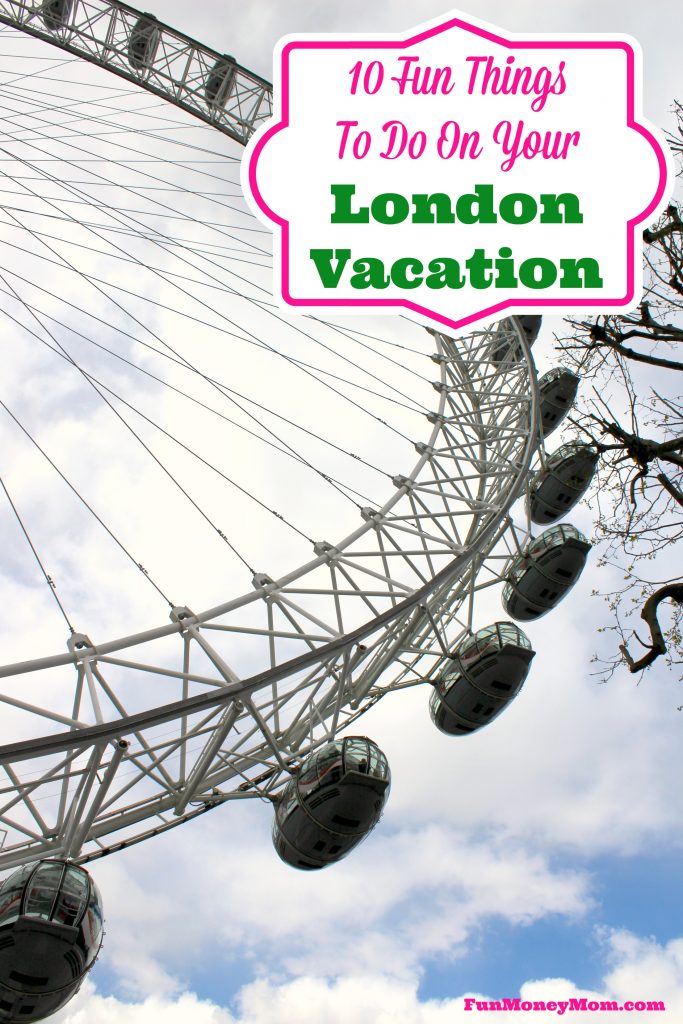 The London Eye, Harry Potter Studio Tours and Big Bus tours gifted tickets to help make my vacation enjoyable.  However, all opinions are strictly my own.

I love travelling!  Seriously, if we were to ever win the lottery, you’d probably never see us again…we’d be off traveling to the distant corners of the world (probably starting with Vegas if my husband had anything to do with it)!  That’s why I was so excited to go to London recently!  It had been 20 years since I last visited and 10 years since I was last overseas.  It seems that once we started having kids, our vacations became less about Eiffel Towers and French castles and more about beach umbrellas and Disney castles!

Anyway, since we have family staying there for few months, I thought it would give me a great excuse to go visit.  I just had to give my husband a couple extra glasses of wine one night and he agreed to let me use our frequent flyer points to go!  He’s such an awesome hubby, isn’t he?!

Since I hadn’t been to London in so long, and who knows when I’ll go again, I squeezed as much as I possibly could into those 10 days!  Relax on vacation?  Nope, that’s some other tourist…I’ll relax when I get home again.  Oh wait, I have kids.  Never mind!  Anyway,  I was able to combine a great mix of the old and the new and if you ever plan your own trip there, these are what I would consider to be the top things to do in London.

Take a spin on the London Eye 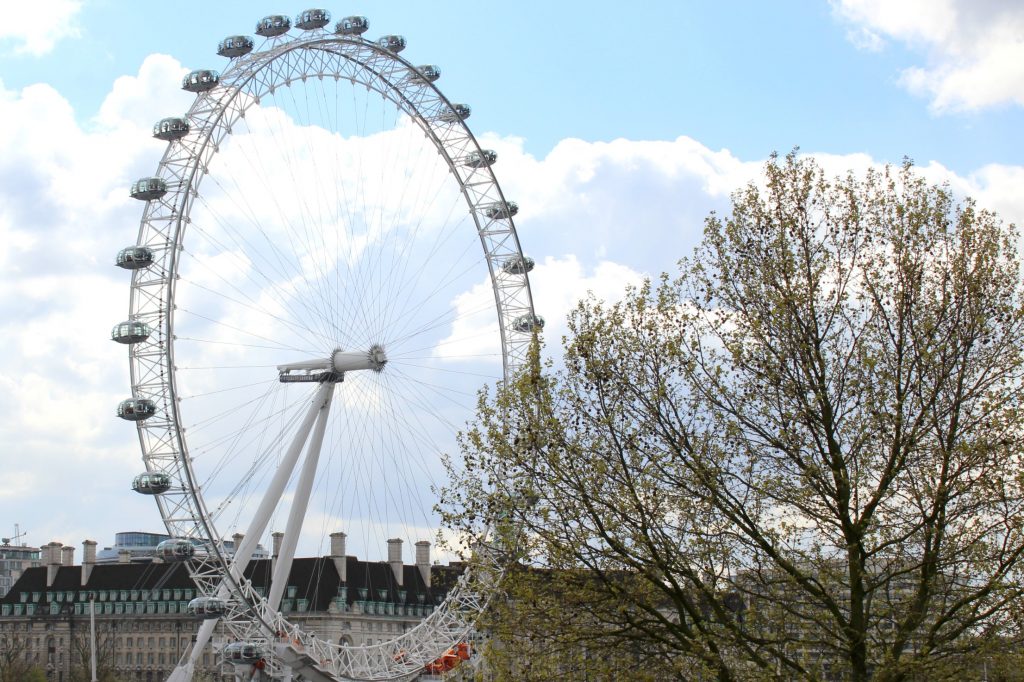 I have to be honest, this was one of the things I was most excited about seeing on this trip!  The last time I was there, the London Eye wasn’t even built yet!  It was a bit of a thrill to see it for the first time set against the backdrop of Big Ben and the Houses of Parliament!  Before you ride, I recommend seeing the 4D Cinema Experience…it may be only 4 minutes long but it’ll get you excited about your ride! Plus it’s free with your ticket so why not?   There was a long line on  the day that I was there and I was really glad to have the Fast Track Ticket so I could walk right on.  I highly recommend it, especially if you have limited time.  Once aboard, you’ll get the best views of the city you could imagine!    Your rotation lasts for a good 30 minutes so you’ll have time to take lots of pictures and really enjoy the view.  Whether this is your first trip to London or your 10th, a ride aboard the London Eye should be at the top of your list! 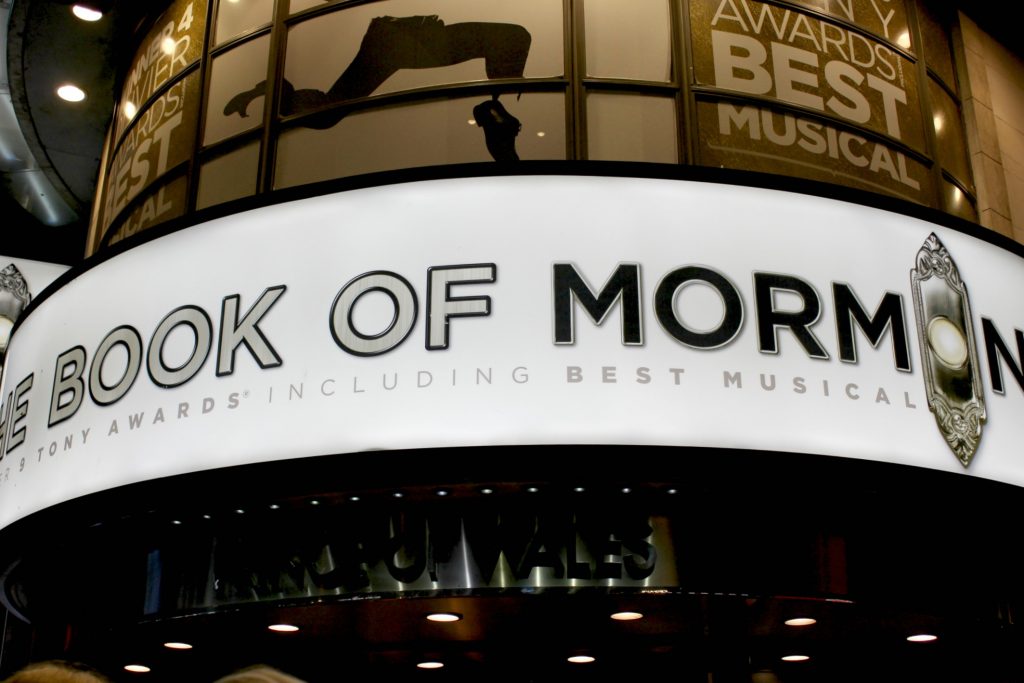 In the 8 nights I spent in London, I went to 5 shows!  If you’re a fan of the theatre, this is heaven!  The great part is that you can get amazing seats without having to spend a fortune!  The most I paid for a ticket was £29 (approximately $42) and all the others were £15-25 ($21-$36).  Lucky for me, almost all of the shows that I wanted to see had awesome day of show deals.  I was able to get front row (a.k.a. The Stalls) to Kinky Boots and Wicked just by going to the theatre the morning of the show and buying my tickets then.  Be sure to go early because they could sell out.  I showed up around 10:30 but the ticket window opens at 10.  The other show that I was dying to see, The Book Of Mormon, ran their same day “stalls” seats via a lottery, mainly because they’re the most popular show in town!  You’ll need a bit of luck (it took me 4 tries) but it’s so worth it to see such an awesome show from the front row (especially at that price)!  TheatreMonkey.com is a great resource for finding the best deals and they also have an entire page devoted to just “day of” ticket sales.  Sometimes procrastination can be a good thing!

Chill At The IceBar London 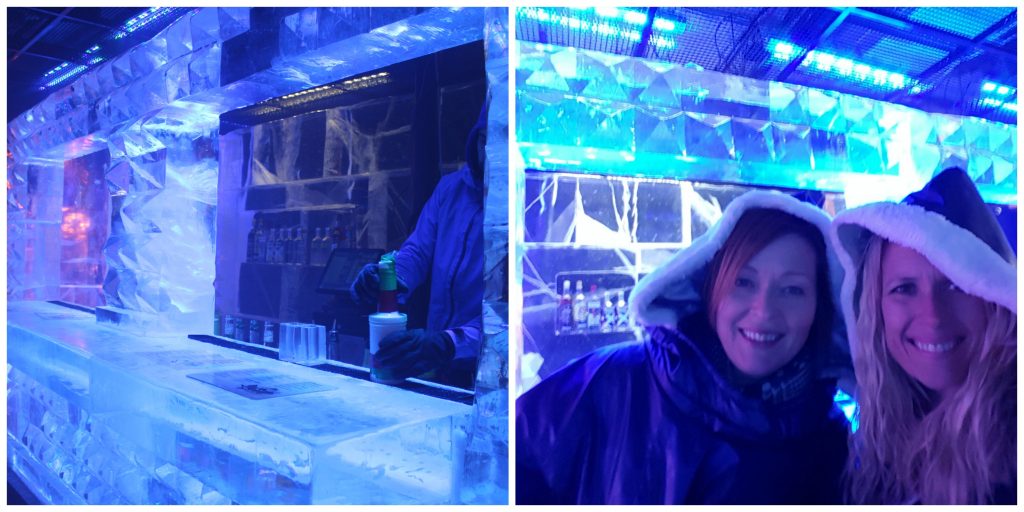 I’d see a place like this on a travel show and it looked so cool, literally, that I jumped at the chance when I realized that there was an IceBar in London!  Yes, I totally get the irony that someone who hates being cold as much as I do wanted to go to a bar made of ice.  However, I’m willing to freeze a little if it means experiencing something as unique and fun as this…plus, there’s booze!

You’ll pay £14.95-16.95 depending on the day, but that includes a 40 minute session and your first drink.  Once you get your cloak and gloves, you’ll enter a chilly 23°F bar where everything really is made out of ice, even the glass that you drink out of.  I love the rock-n-roll theme and the fact that all the drinks are named after popular songs (being a Bon Jovi fan, I HAD to order the Livin’ On A Prayer…delicious).  IceBar is an experience like no other and definitely worth a stop on your tour!

Immerse Yourself In History At The Tower Of London 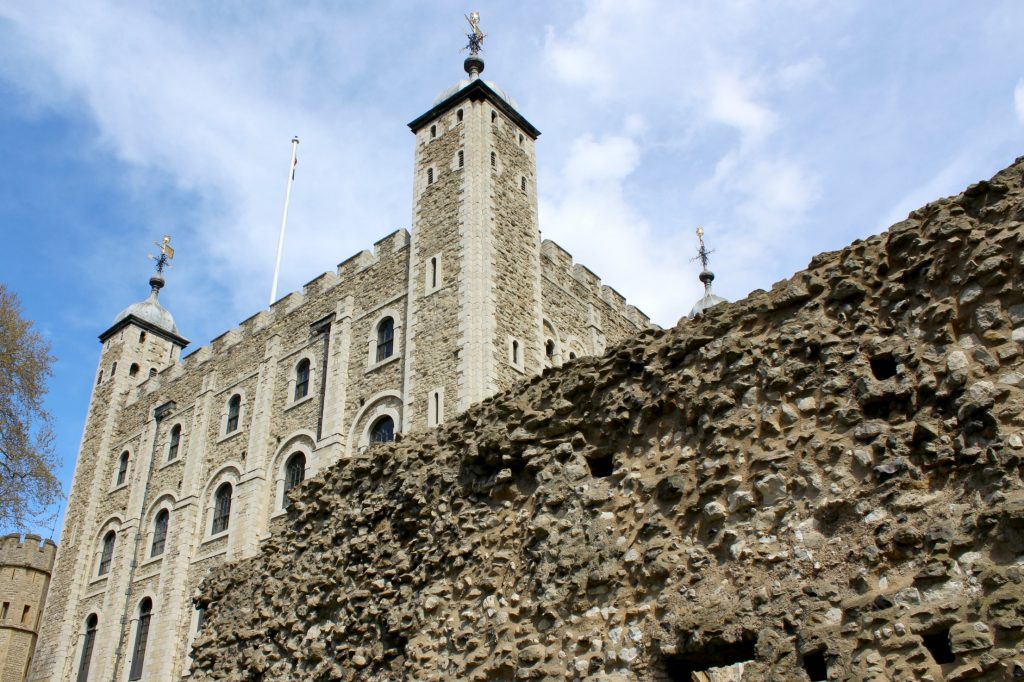 Another must-see is the Tower Of London!  Even if you’re not into history, the stories within these walls are pretty fascinating.  This is where Henry VIII lived, Anne Boleyn was beheaded and where an actual polar bear was kept among the other Royal beasts!  Plus, who wouldn’t want a chance to see the famous Crown Jewels, which includes a 530 carat diamond!  There was quite a wait to see the jewels when I was there but it was well worth it!  There were so many diamonds, emeralds, sapphires and other jewels that they almost didn’t even seem real.  At first I didn’t like that you viewed them from a moving platform but then I realized it was a good thing because you didn’t have to fight your way through a crowd to see them.  Don’t worry, if you don’t get a good enough look at them the first time, you can get right back on the moving platform for a second look.  That’s what I did a couple times…I had to get a better look at those amazing diamonds!  The admission price isn’t cheap but I felt like it was well worth it! 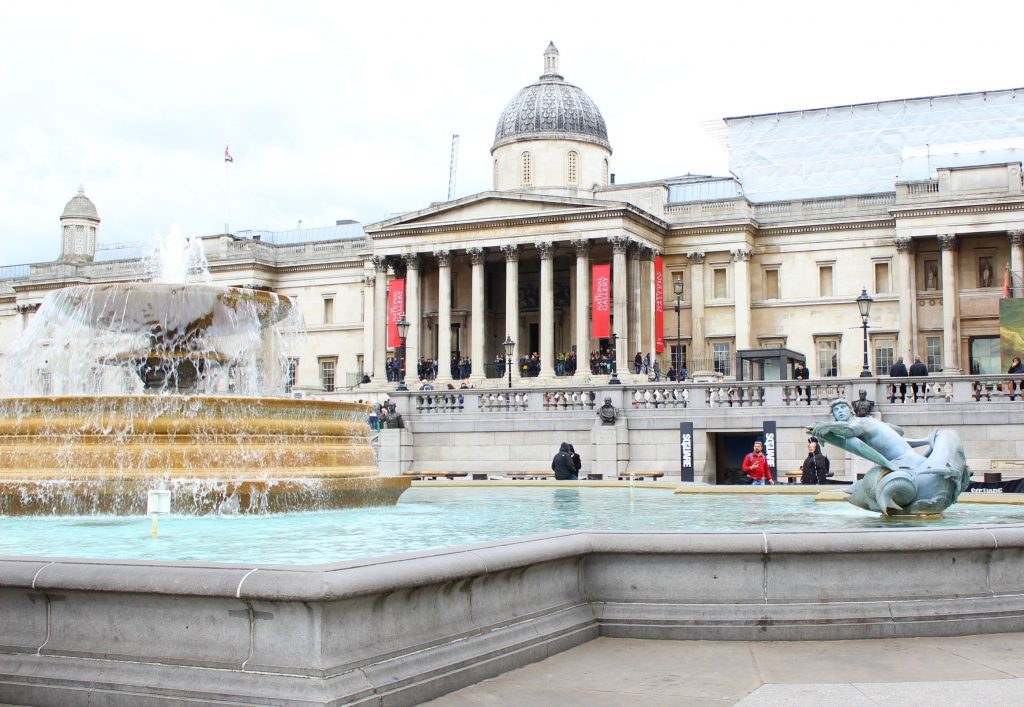 I was trying to do this trip as frugally as possible and I was pretty excited to find out that almost all the major museums in London are free!  If you only have time to see one, I highly recommend the National Gallery off Trafalgar Square.  You’ll see everything from Monet and Seurat to Rubens and Titian.   When you’re done there, you can head over to the Tate Gallery, the Tate Modern, Victoria and Albert Museum, the British museum, the Natural History Museum, the Science Museum and more.  I would have seen them all if I had time but I did enjoy the collection at the Tate Modern.  While I love traditional art, I find modern art both strange and fascinating at the same time!  I didn’t make it to the Natural History Museum but my nephews had been and loved it…you’ll definitely have to make a stop there if you’ve brought the kids along! 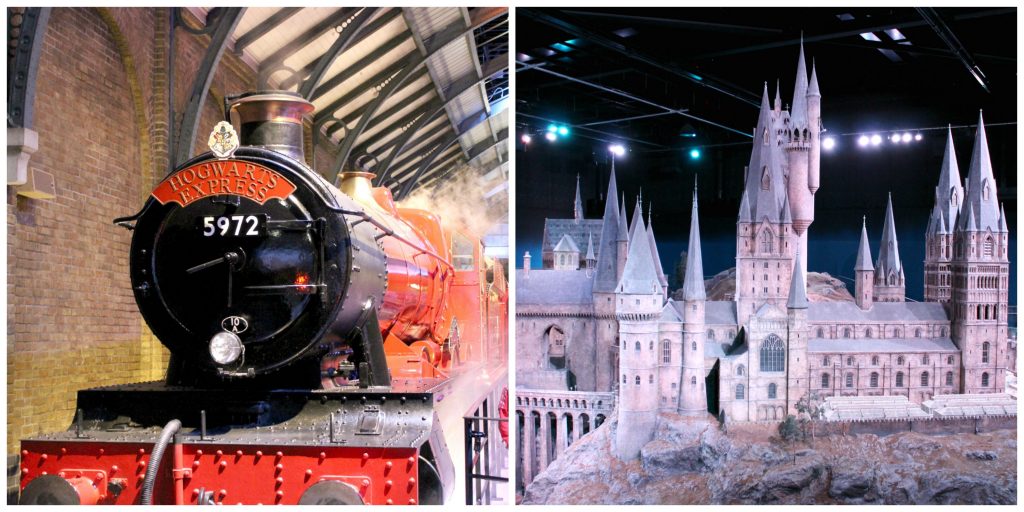 I have a confession to make…I haven’t read a single Harry Potter book and have only seen a portion of the first movie.  I really just planned to go on the Harry Potter Studio Tour because my nephews are big fans and thought it would be fun for them.  That being said, I absolutely LOVED this tour!  For more than ten years, the cast and crew filmed all of the Harry Potter films on this soundstage.  It was fun to know that everything on display was actually used in the real movie…no recreations!  You’ll see the Great Hall, stroll down Diagon Alley, climb aboard the Hogwarts Express and view an absolutely amazing model of Hogwarts.  That’s not counting all the props you’ll see such as Harry Potter’s glasses and wand.  We even drank “real” butterbeer with our lunch (note: it tastes nothing like actual beer).

I enjoyed this tour so much that I’ve suddenly become a Harry Potter fan (and wrote an entire post about my studio visit)!  I plan to start reading the first book to my 8 year old as soon as I can get hold of one.  Of course I’m going to have to watch all the movies now too!  If you are a Harry Potter fan already, you will not want to miss this attraction!

This is one of the best free things you can do in London.  I can’t tell you how much time I spent watching singers, dancers, performance artists, and other street performers while I was in London.  I somehow even got drawn into a performance as I was minding my own business eating a sandwich…so fun!  Not all of the performers are good…I didn’t really get the guy with the “superfast fingers”.  However, many of these people do have talent and can put on some entertaining shows.  I also had a lot of fun trying to figure out how these guys in Trafalgar Square were actually “levitating” (I did end up figuring it out but won’t give it away). 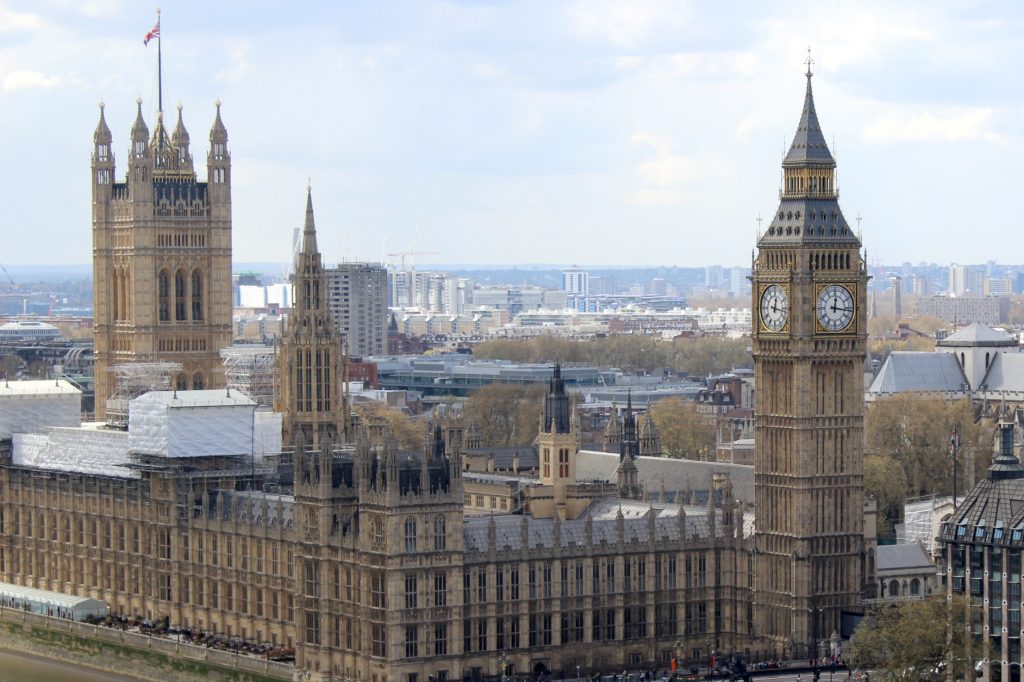 Even though looking at Big Ben always makes me want to channel Chevy Chase from European Vacation, it’s still quite a sight to see.  Just like seeing the Eiffel Tower or the Roman Colosseum for the first time, it’s pretty cool to look up and see Big Ben in person.  I never did see Peter Pan though, much to the chagrin of my 4 year old who had instructed me to look for him!  The Houses Of Parliament are right there as well so you’ve got some really good photo opps here!

Hang Out In A Pub 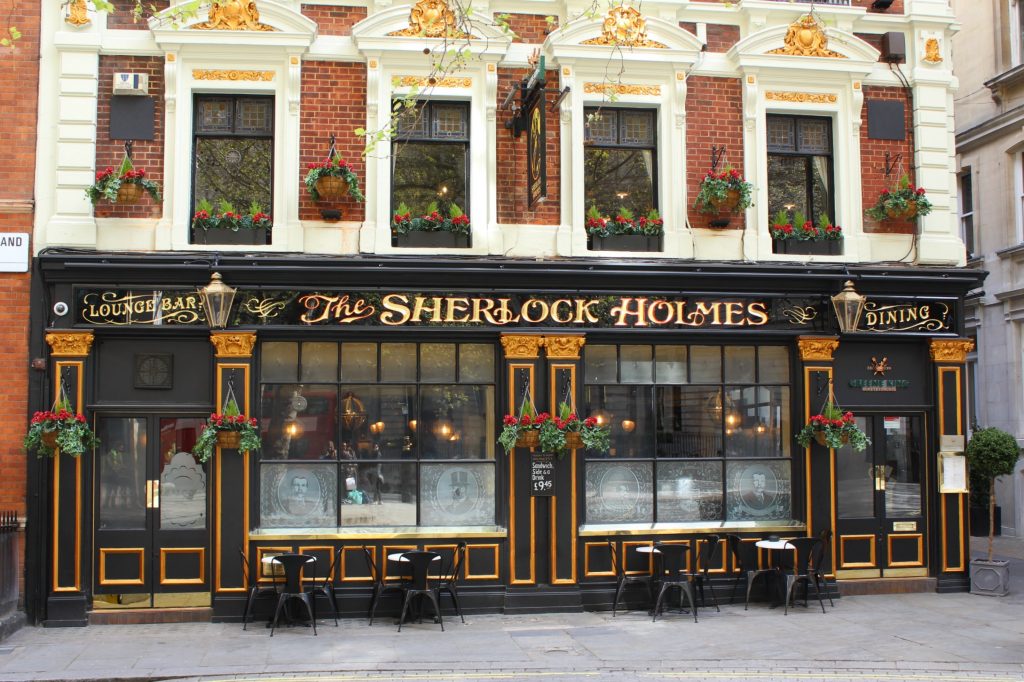 You can’t go to London and NOT go to a pub!  This was pretty much my routine every night that I saw a show.  I’d have dinner and a drink, then hit the theatre.  You should also order the fish and chips at least once, though I was surprised at just how pricey it is in most places.  It sure is good though…YUMM! 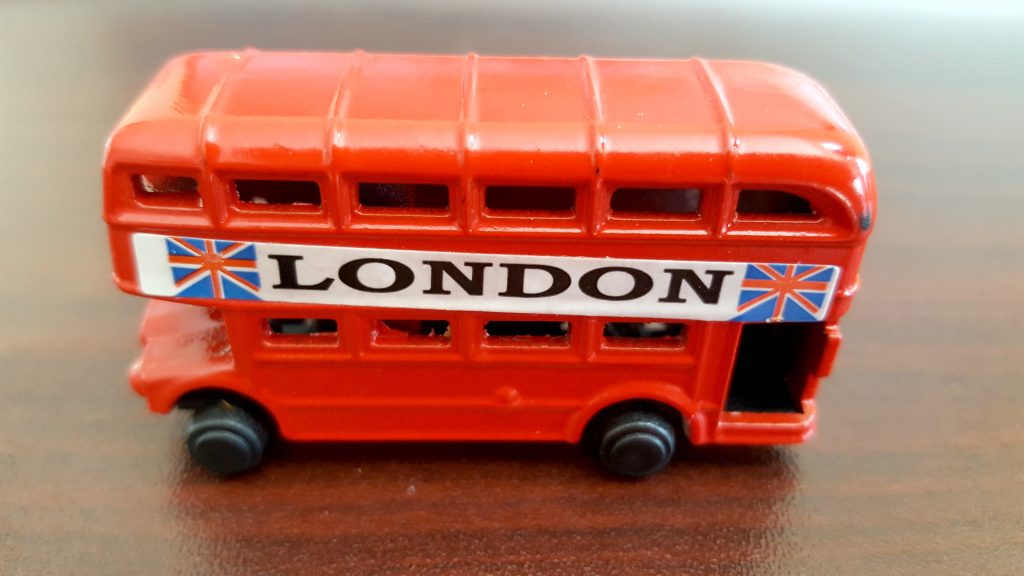 I have no idea how I managed to take so many hundreds of pictures but not end up with one shot of an actual double-decker bus (so you’re stuck with this picture of a cheesy souvenir that I brought home for the girls) .  I really did ride on several while I was there and you feel like you’re getting the true London experience when you’re checking out the city from the top of one of these buses.  I actually took the Big Bus tour where you can hop on and hop off whenever you want throughout the day.  It’s really the way to go because it takes you to all the best sites and even includes a river cruise and several walking tours.  Even if you don’t take the Big Bus, promise me you won’t go home without riding on a double-decker bus at least once!

Of course, there are many more things to do than just what’s on this list.  I didn’t even mention the Changing Of The Guards, the Tower Bridge, Piccadilly Circus and so many more.  These are just the 10 things that I personally had the most fun with!  What else would you add to this list?

You can read more about my tour of the Harry Potter Studios, complete with plenty of cool pictures, in this post: 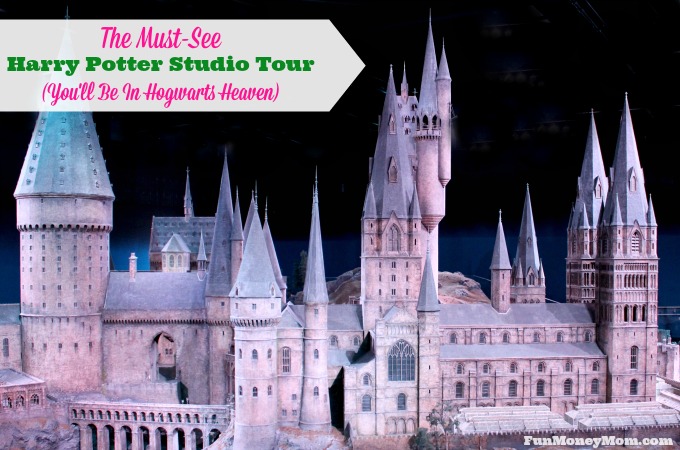