This shop has been compensated by Collective Bias, Inc. and its advertiser. All opinions are mine alone.  #FindingDelicious #CollectiveBias We’re a family on the go, so on the weekends we love to enjoy a little downtime! We sleep a little later (well, some of us at least) and don’t feel the usual rush to get out the door. Once everyone’s up, we share a family breakfast together…something we definitely don’t have time for during the week! The first question from my girls is always “What are we doing today?” Sometimes we’ll go to a local festival or the park but other times we’ll just stay home and have fun in the pool. However, every once in awhile I’ll cook up something totally unexpected!

We’d been to Target the previous day and my kids were excited by all the Disney Pixar Finding Dory stuff they “found” throughout the store! We were quick to add the Disney Pixar’s Finding Dory themed Campbell’s Soup and Goldfish® Special Edition Cheddar Disney Pixar’s Finding Dory Crackers to our cart! My girls already can’t get enough of these but something about having the Disney Pixar Finding Dory characters on them made them that much better…if you have kids, you know exactly what I mean! Not only do the soups feature fun pasta shapes with chicken, you can also get three unique labels with Dory, Nemo, and Hank (the new guy). Even better, the soup has no added MSG and the special edition colors in the Goldfish crackers are colors sourced from plants! Lucky for me, they were on sale too! Through June 26th, Target has Goldfish crackers featuring Disney-Pixar Finding Dory for 20% off. You’ll also get 10% off Campbell’s Dory Healthy Kid’s soup. 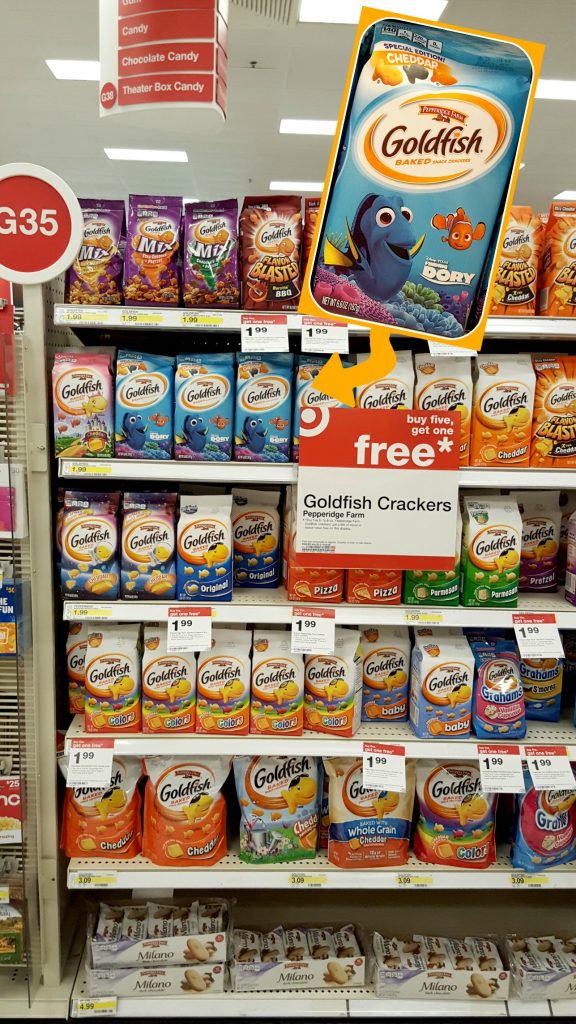 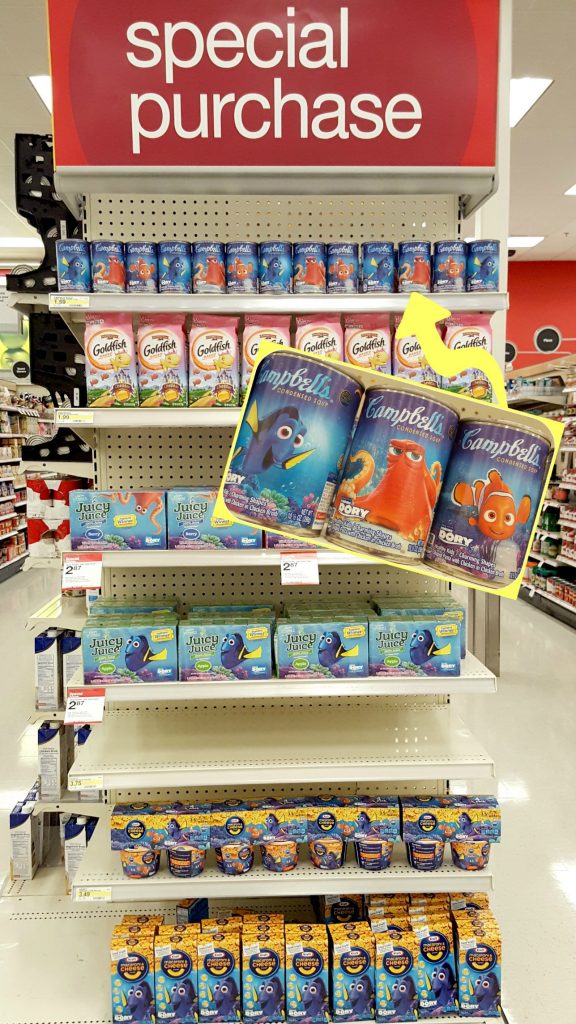 My girls couldn’t wait to get home to have soup and Goldfish crackers for lunch, which was fine by me because I’m all for an easy meal. I added a couple of turkey and cheese sandwiches on the side and had two very happy kids! While they ate, I was putting away all the soup that we’d stocked up on and the proverbial light bulb popped on over my head! Stacking all those cans reminded me of the nearly impossible carnival game where you have to knock a pyramid of cans over with a baseball. Are you thinking what I’m thinking? Yes, let’s have our own carnival! Only our games will be a little lot easier to win!

I had the first game figured out so now I had to think of a couple more. Since my girls love the game where you throw a ring around the top of a soda bottle, I decided to make my own version. Again, my version would be one that they could actually win!

Since I didn’t have any soda bottles on hand, I had to come up with plan B. I did have a paper towel roll but we couldn’t just throw rings around that…how boring! Since my first game already had a Dory theme, I decided to go with that and got a little crafty with the paper towel roll and some Goldfish crackers. This was a job for the glue gun!

I started by cutting an 18″ x 18″ square out of foam board and painted it blue, then painted the paper towel roll orange. Next I cut 2″ slits in the bottom of the paper towel roll so that I could fold the tabs back to glue it onto the board. Finally I glued the Goldfish crackers to the tube in a pretty little pattern and the Ring Toss game was ready to go!

The third game is a spin-off of the one where you throw darts at a wall of balloons to pop as many as you can. Since I didn’t trust my four year old (or even my 8 year old) to throw darts without someone getting seriously injured, I changed it up a bit. I wrote questions about the characters and put each of them in the balloons, color coding them so that little Keira’s questions would be slightly easier. They could also choose whether to sit on or stomp the balloons in order to pop them.

Of course, you can’t have a carnival without prizes, right? After each game, the girls would receive a very special seashell. Once they collected three seashells each, they could turn them in at the end for a fabulous Grand Prize, which would remain a secret for now!

The girls were super excited and couldn’t wait to get started! They chose the Baseball Throw first and had a blast knocking over the soup cans – which we did not try to knock over until they had eaten and the cans were empty (and mommy got some good action shots)! Everyone’s a winner! 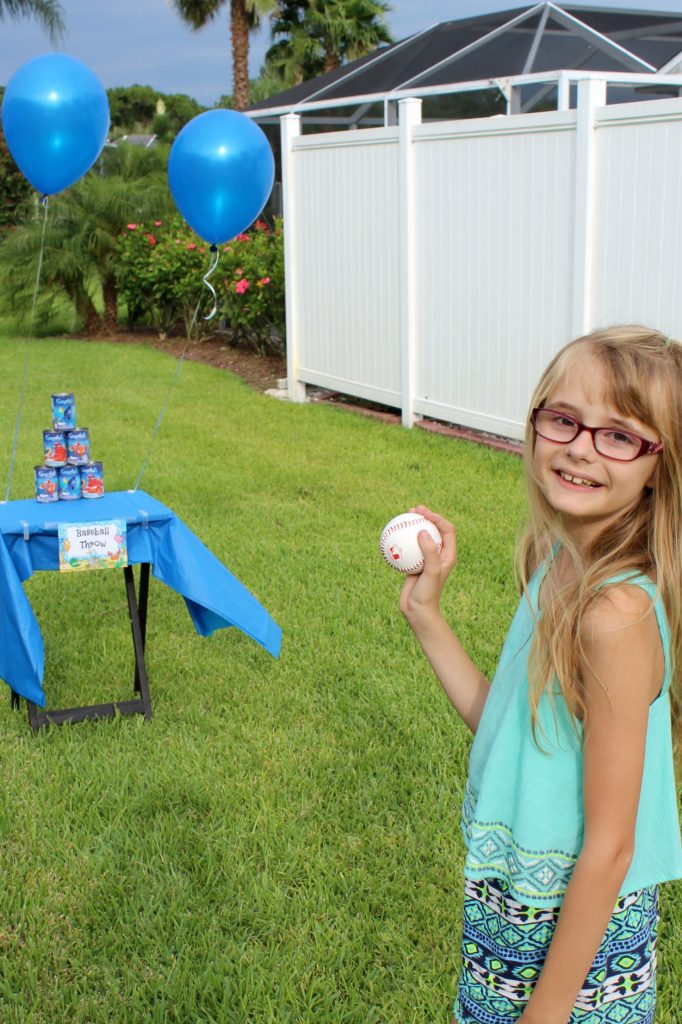 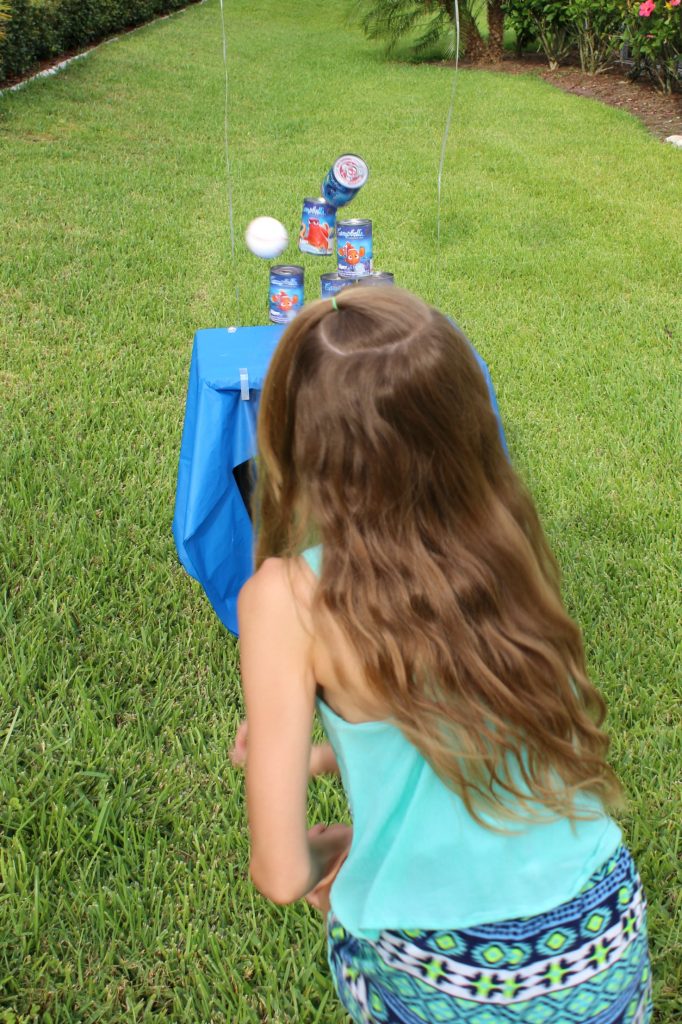 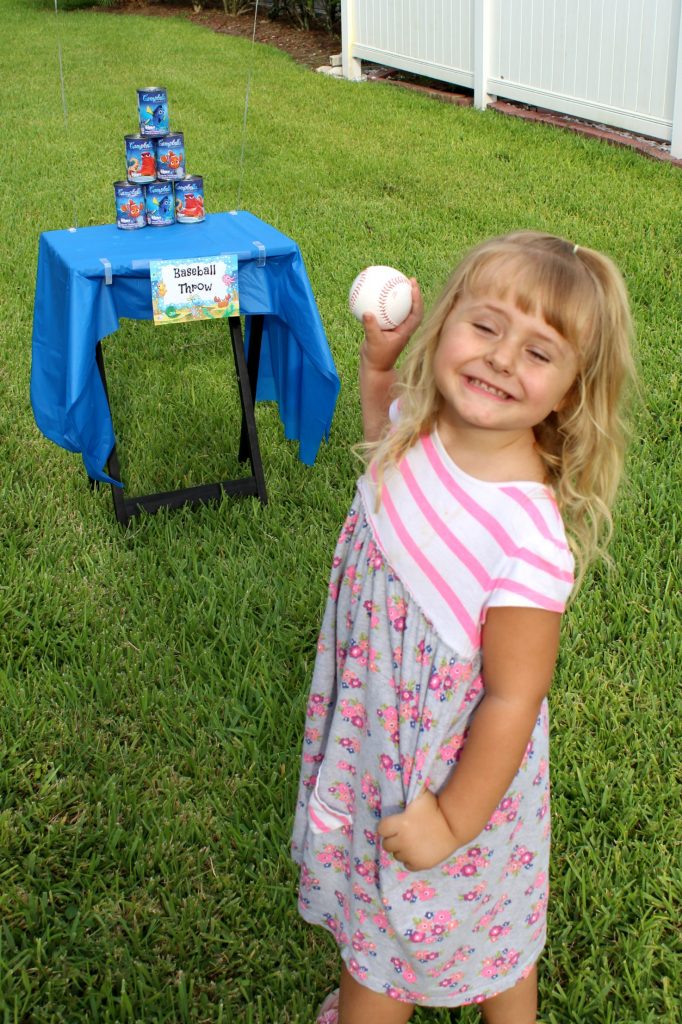 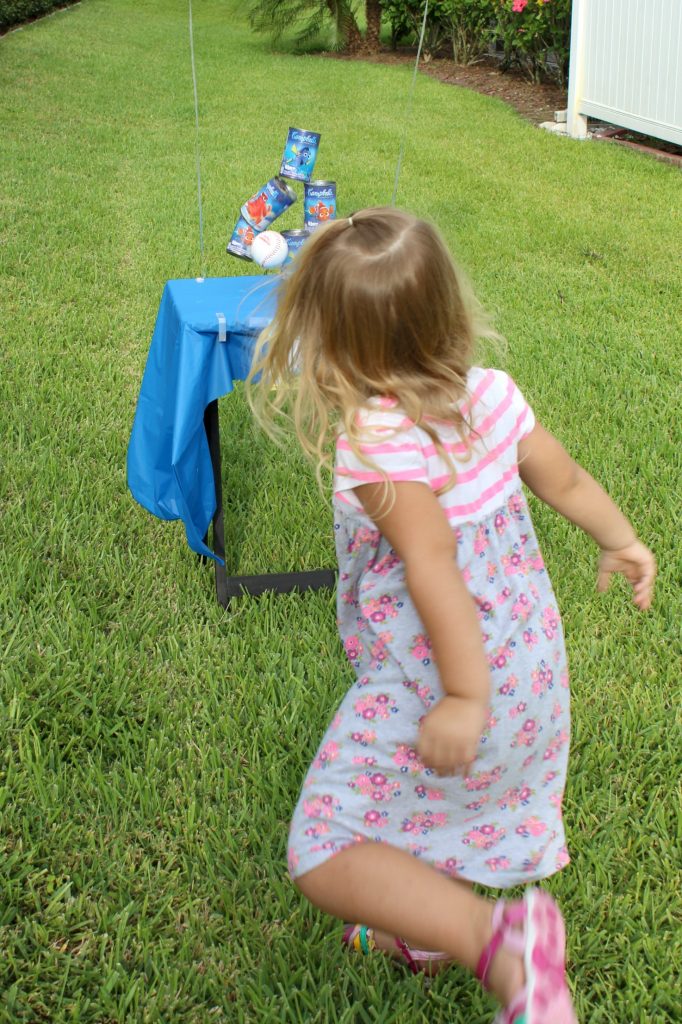 Next we moved on to the ring toss! I’d picked up some hula hoops for $1 each so not only did the girls get a fun day of games, now they had new hula hoops too. Again, winners all around! 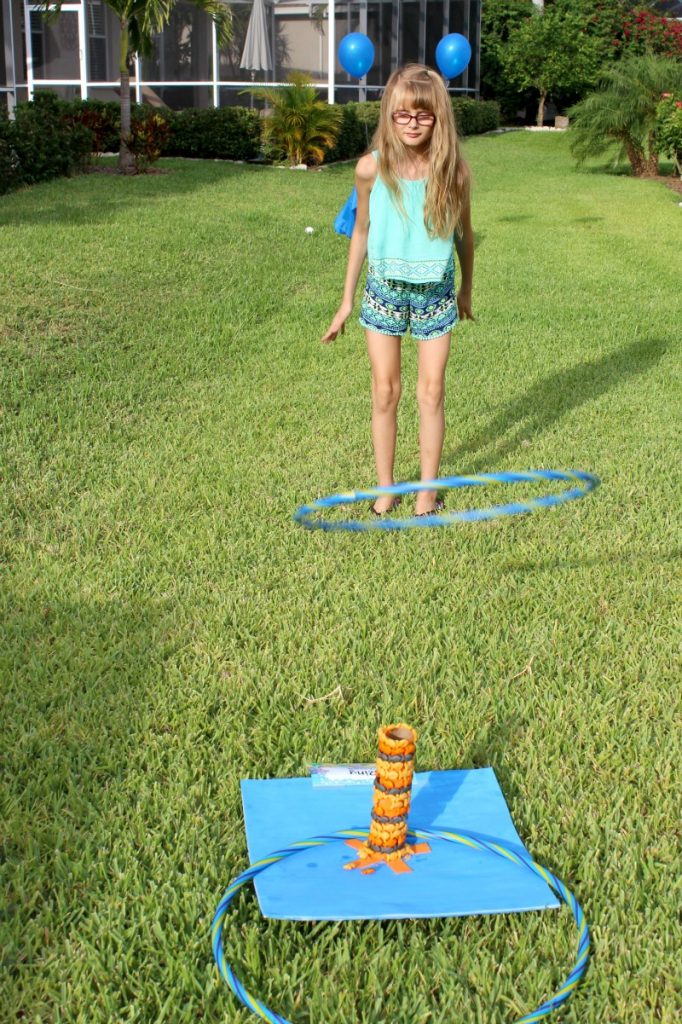 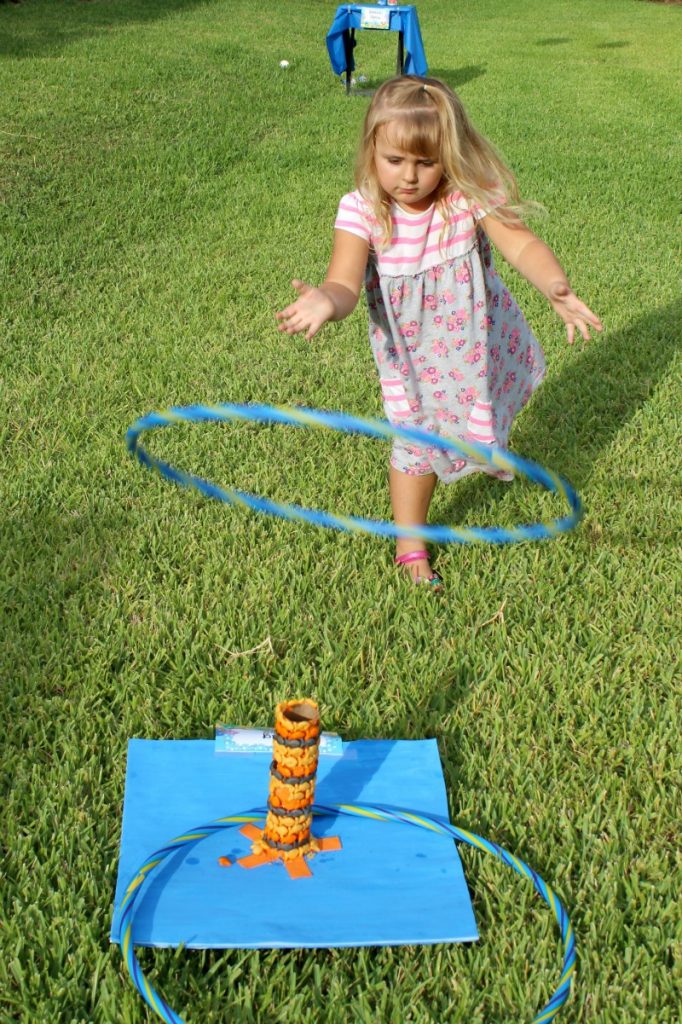 The Balloon Pop was the grand finale. The girls loved popping the balloons though Keira did have trouble with one of her questions. This was because she wasn’t really on board with my color coded plan and wanted one of Ashling’s balloons instead. Try telling a four year old she can’t have the orange balloons and suddenly orange is her favorite color! I quickly added an “ask a friend” option, she asked Ashling for help and again, everybody won! 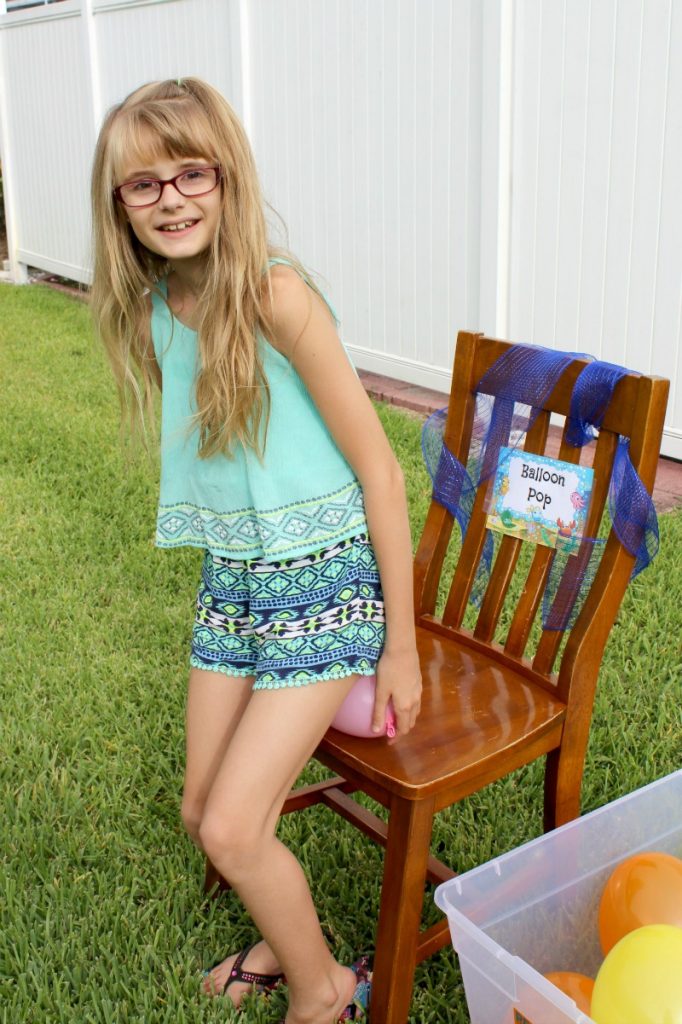 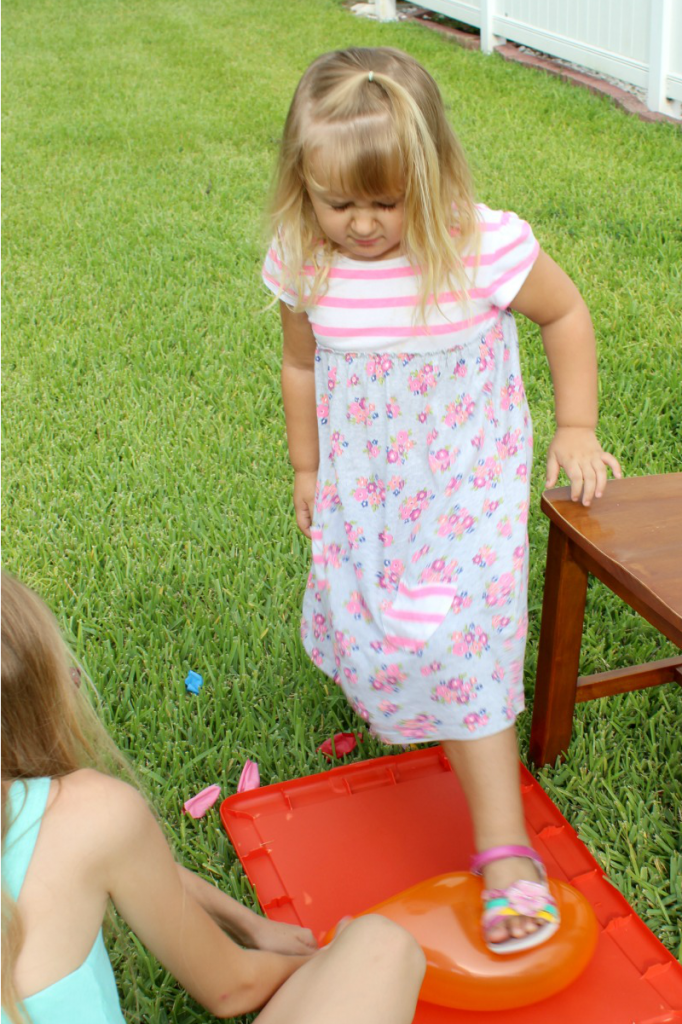 Once the girls collected their winning seashells from all three rounds, they were able to turn them in for an even better prize! This is what my little winners were presented with! I wonder what movie they’ll want to see! Feel free to use my printables for your own backyard carnival! I’ve even included a blank one so you can add your own favorite games. Of course, no carnival is complete without some yummy treats! The girls dug right in and even daddy was excited to come home from work to find caramel apples (his favorite treat)! Don’t forget to pick up your Goldfish crackers featuring Disney-Pixar Finding Dory and Campbell’s Dory Healthy Kid’s soup while they’re on sale at Target and have fun creating your own backyard carnival!  What are your favorite carnival games? Have you ever won that elusive over-sized stuffed animal?