This adorable Rapunzel cake is perfect for your princess party! It’s so much fun to make and a lot easier than you’d think. If you want a princess cake that’ll wow everyone at the party, this one is for you! 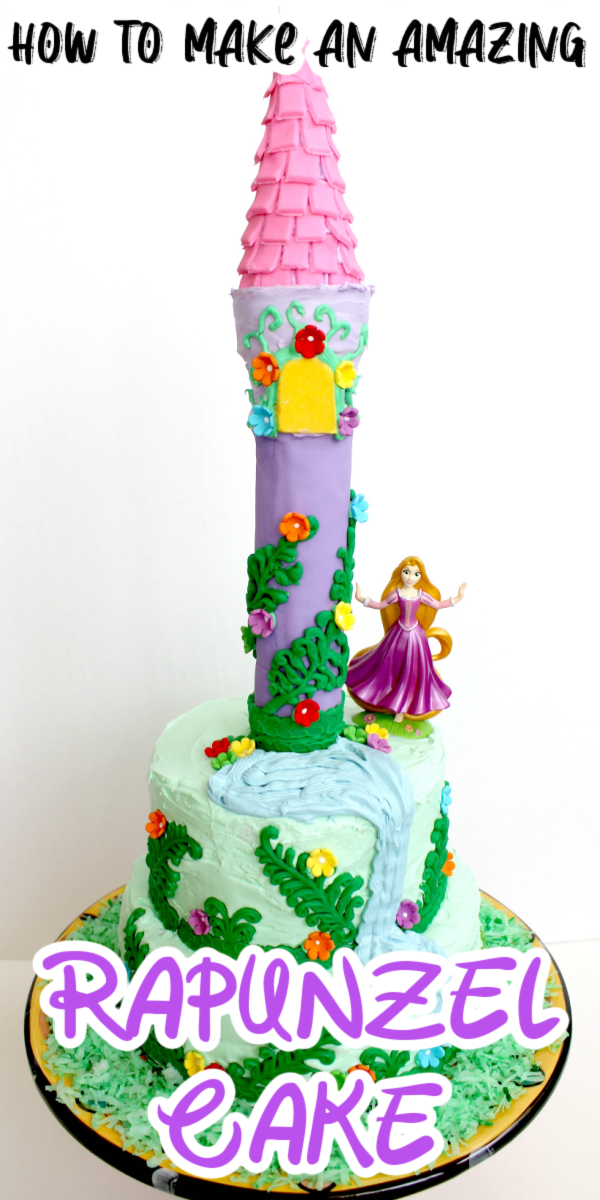 When my youngest was getting ready to celebrate her fourth birthday, she insisted on a Rapunzel theme.  Originally she wanted the extravagant castle cake that I made for her big sister’s birthday but since I’ve already made that twice, I convinced her that we should try something different.

I reached into my big bag of Disney princess ideas and suggested a Rapunzel cake, an idea she loved.  I didn’t actually know how to make one though. My hope was that I could pull off something that looked more like Rapunzel’s tower than the Leaning Tower of Pisa!

I followed my usual strategy and hit up Pinterest for inspiration.  Wow! There were some really over the top Disney princess cake ideas and a few of these princess cakes were pure art!  Like I did with my castle cake, I took a collection of ideas from different cakes and started coming up with a plan for the perfect Rapunzel birthday cake. I gathered my thoughts, my ingredients and my wine, then got right to work.

The first order at hand was to bake the actual cakes. I was going to make them alternating shades of purple but little Keira put a stop to that when she said that she wanted them “normal”.

For the base of the tower, I made two 6″ and two 8″ round cakes.  Use a wire leveler

to level the tops once they cool off. My hubby loves this part because he gets to snack on the pieces I cut off. 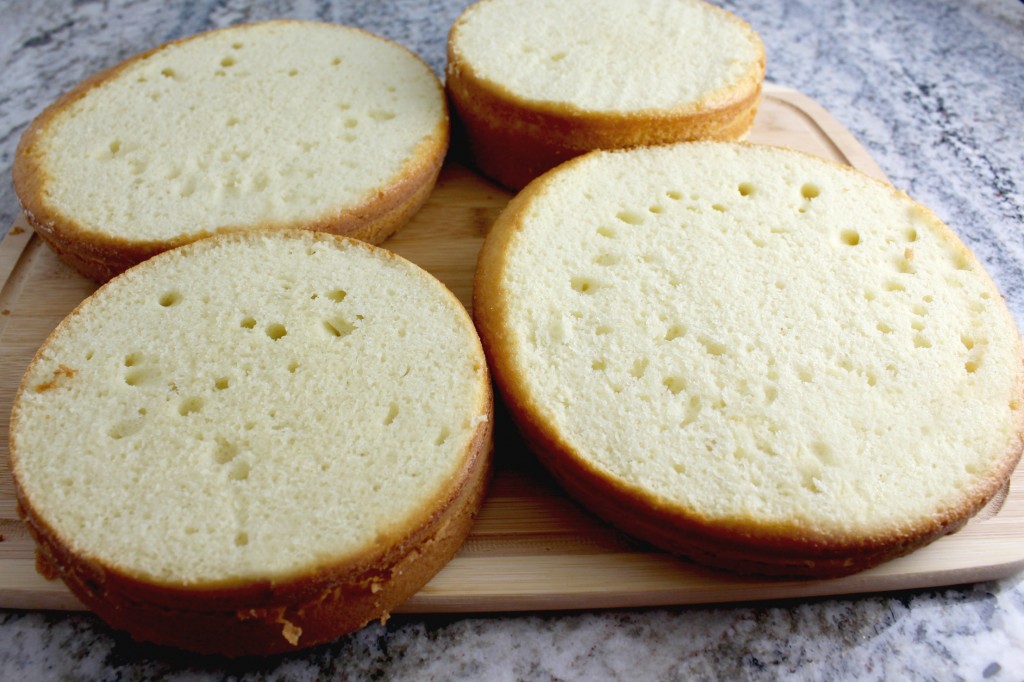 I colored the frosting a pale green and iced the cakes.  When I was trying to decide what to use for the actual Rapunzel tower, I couldn’t think of a single, edible food that would work.  Honestly, my main goal was just to create a tower that wouldn’t fall over!  A simple PVC pipe, the 12″ size, turned out to be just what I needed to do the trick. 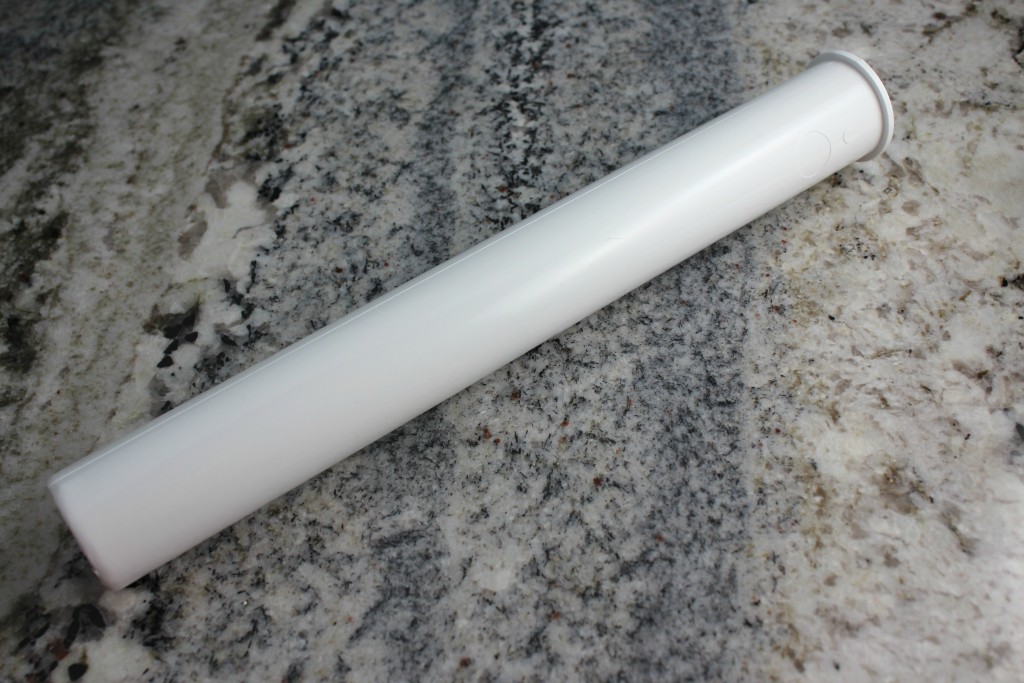 I needed fondant to cover the tower. If you want to save time, you can buy your fondant in the different colors you need. I went the economical route and just bought a big container of white fondant and colored the pieces with food coloring.  It’s simple to do…just add a few drops of food coloring and knead it until the color is evenly spread. Your fingers will change colors along with the fondant so if that’s going to bother you, you may want to wear gloves for that part.

Then I used a rolling pin to roll the fondant flat and wrapped it around the pipe.  I’d never worked with fondant before and it was a lot stickier than expected.  After a quick Google search, I learned that sprinkling corn starch on the surface makes it a lot easier.  The corn starch also rubs right off when you’re finished.  How did people ever accomplished anything before Google came along?!  I’d probably still be trying to “unstick” the fondant from my rolling pin!

When I placed my “Rapunzel tower” in the center of the cake, I realized that I hadn’t covered it enough. No worries, I always have an alternate plan.  You’ll see… 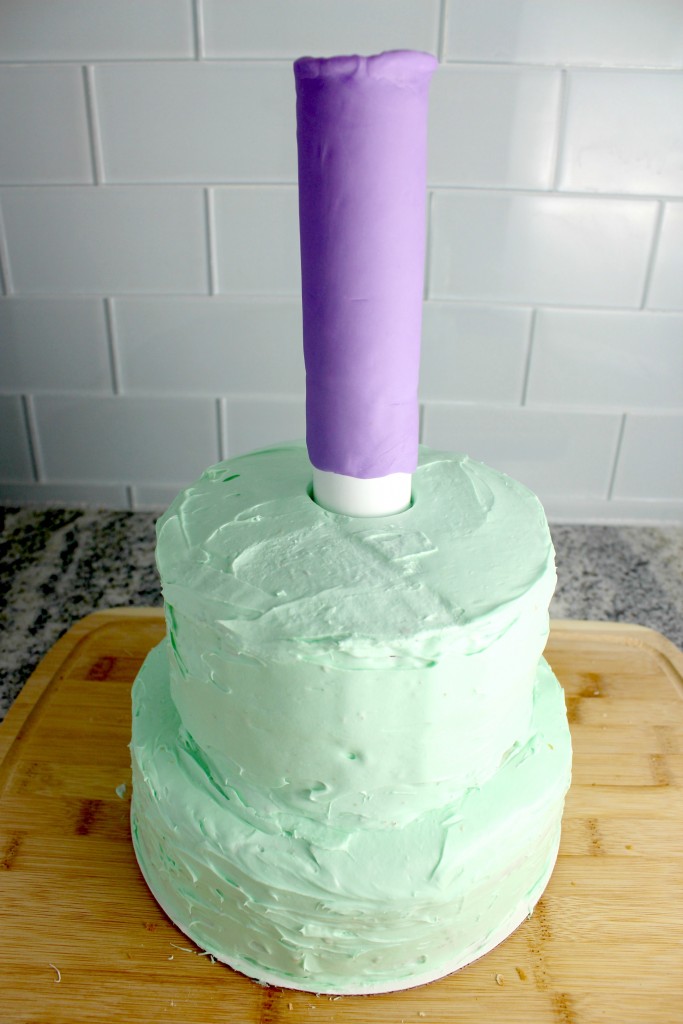 Earlier in the week, I had seen this cool fondant mold

and decided to give it a try.  The greenery looked so pretty in the picture and I knew it’d be perfect for a Rapunzel cake! 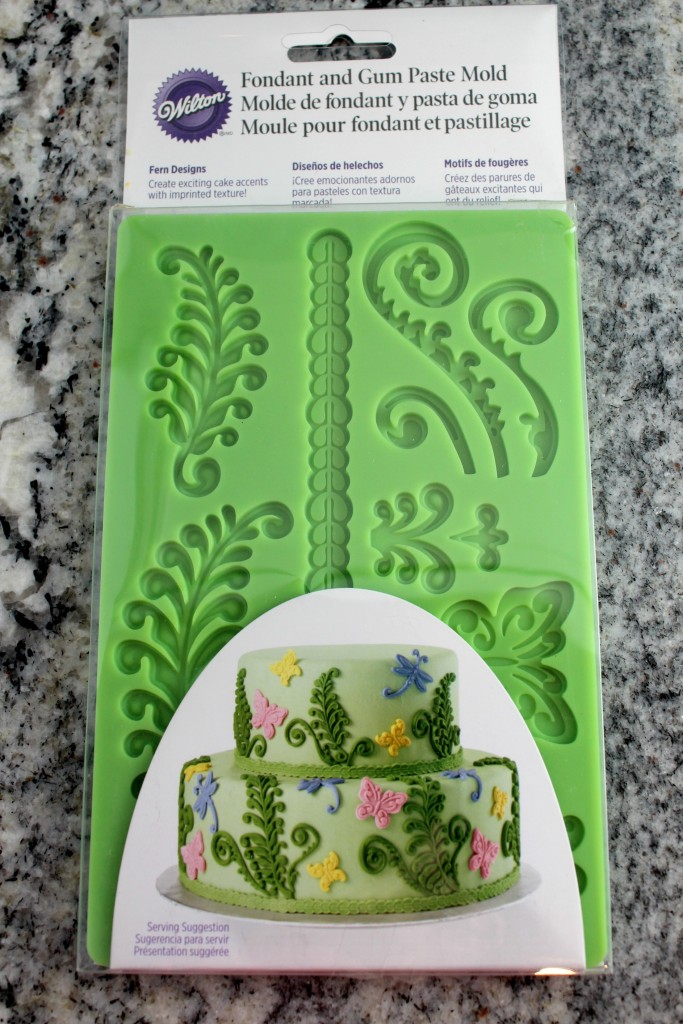 Using the mold was tricky at first but the corn starch definitely helped!  I found it was easiest to start with a long snake-like piece and push from the middle out.  Be sure to push the fondant all the way in…really squish it in there to get into every nook and cranny of the mold.  Then, take a sharp edge and scrape the excess from the top, moving it quickly back and forth as you go so that it doesn’t pull the fondant out of the mold. When you’re finished, the fondant should be flush with the mold. 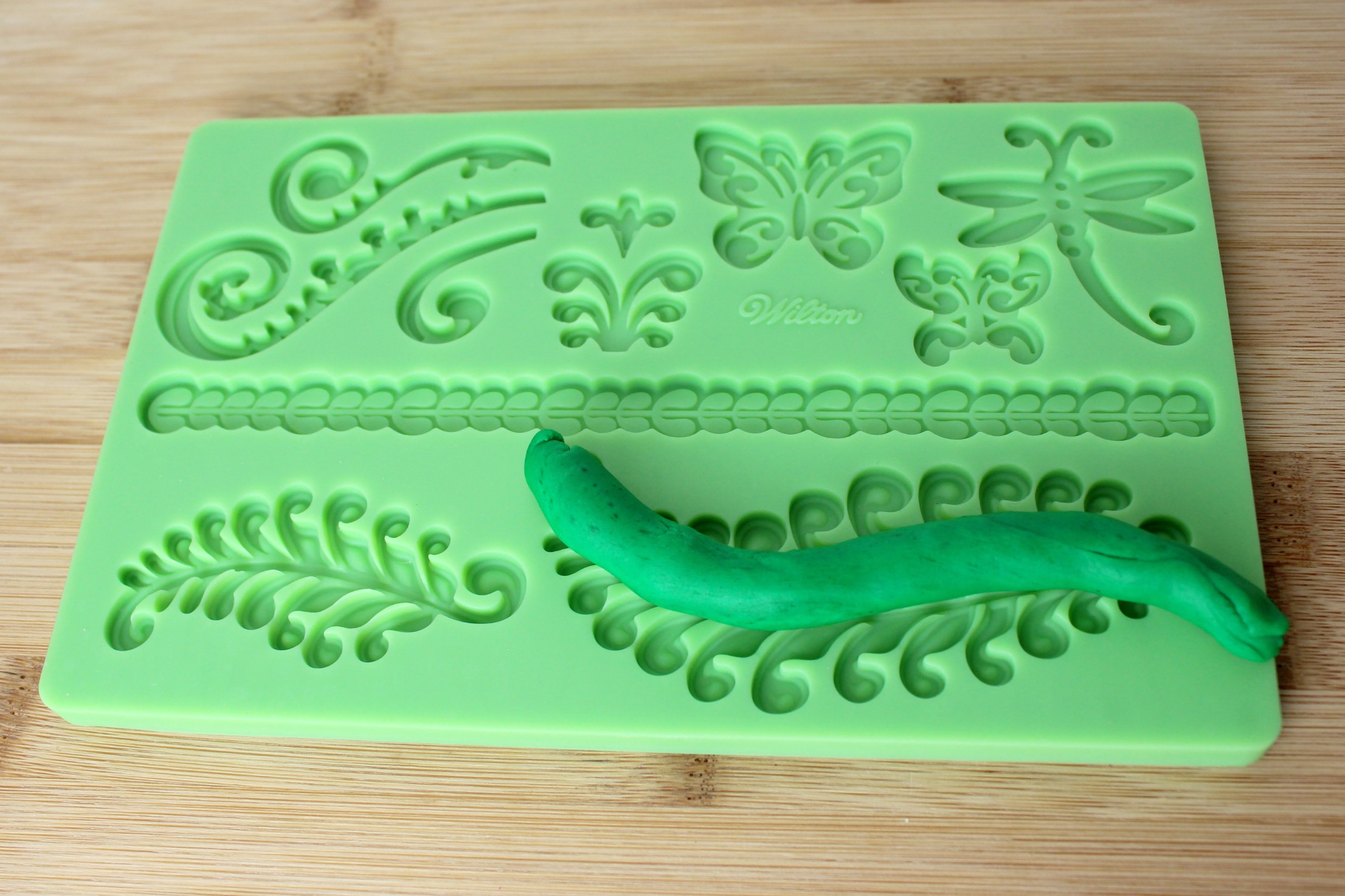 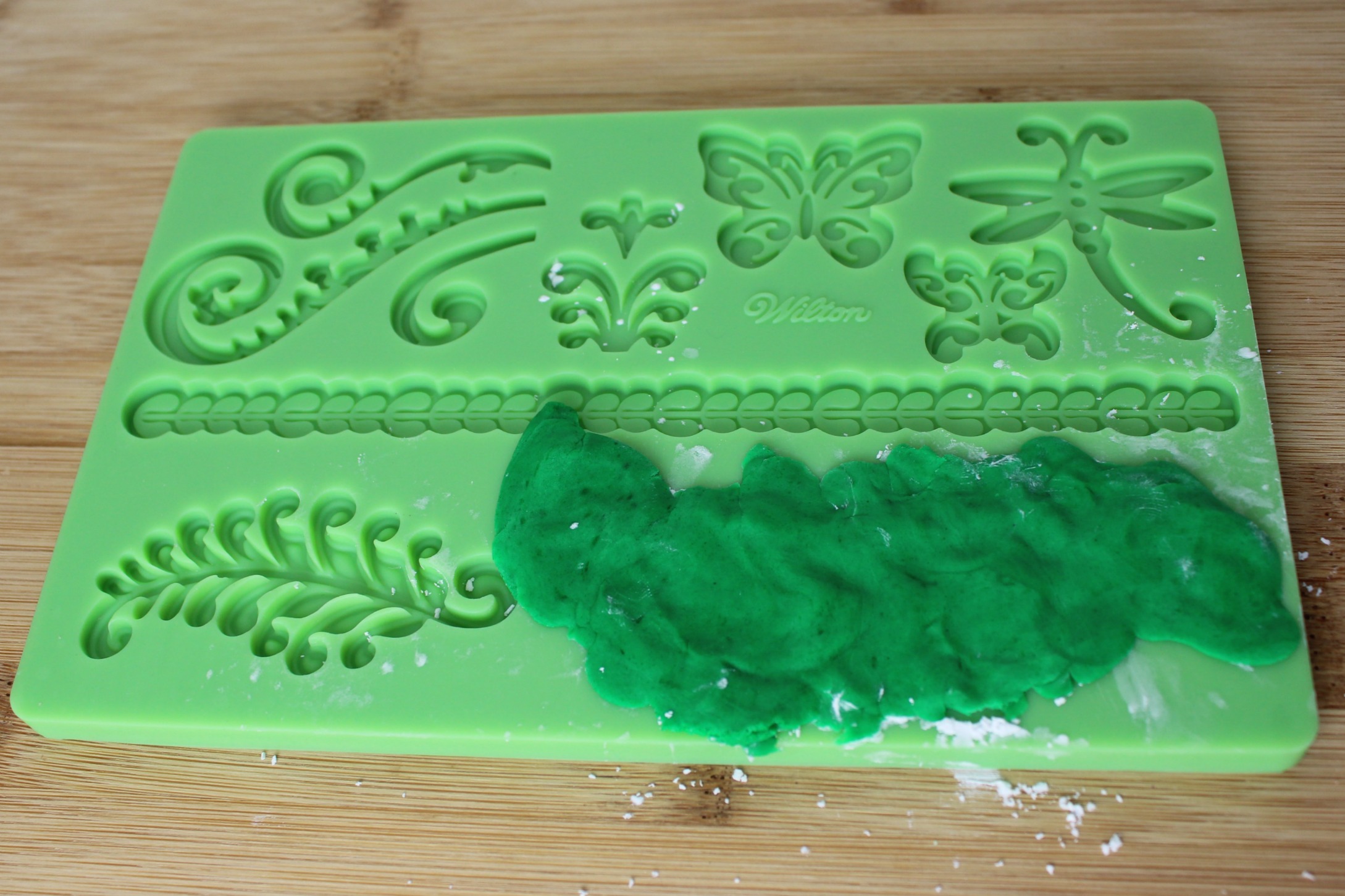 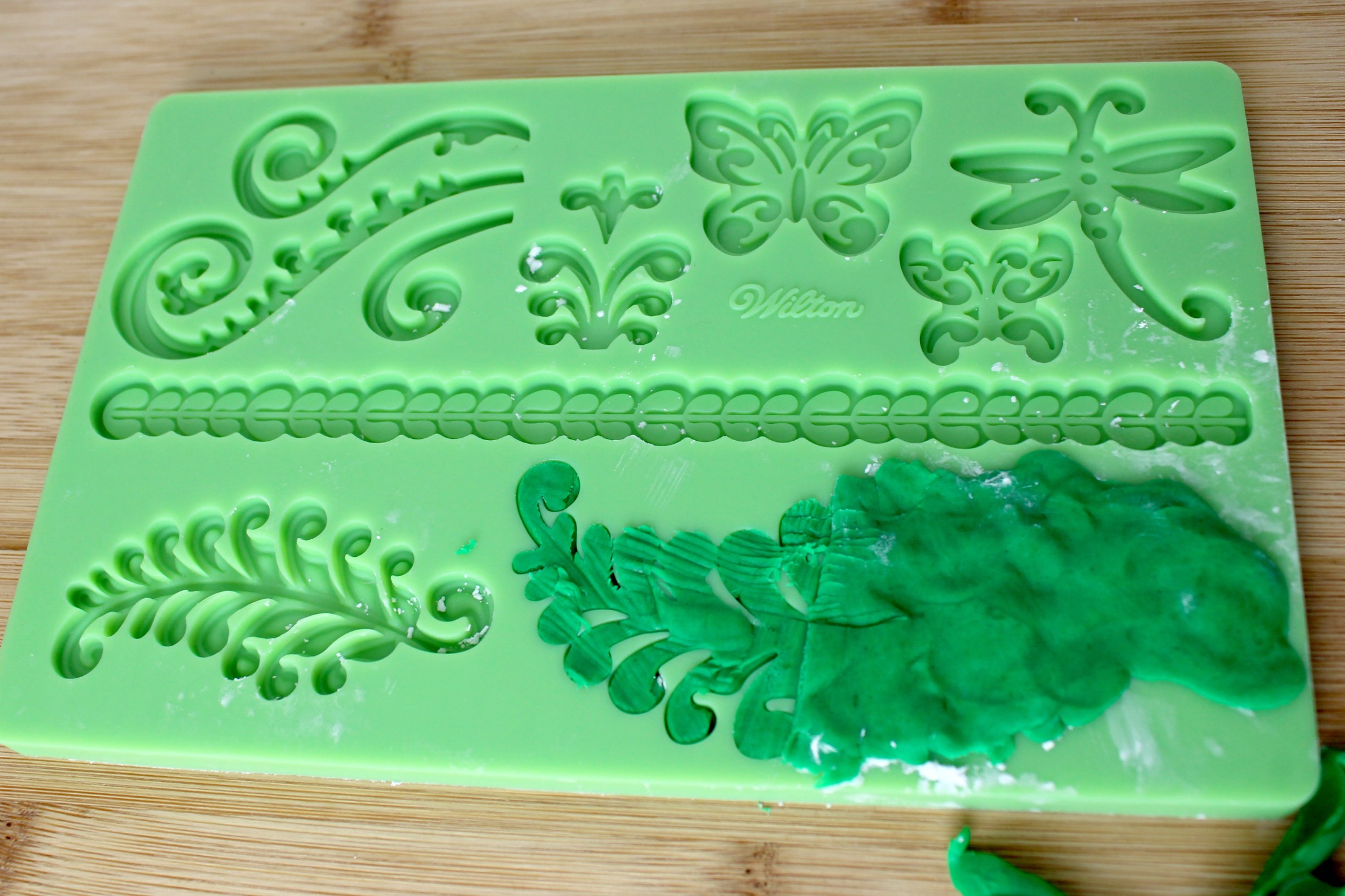 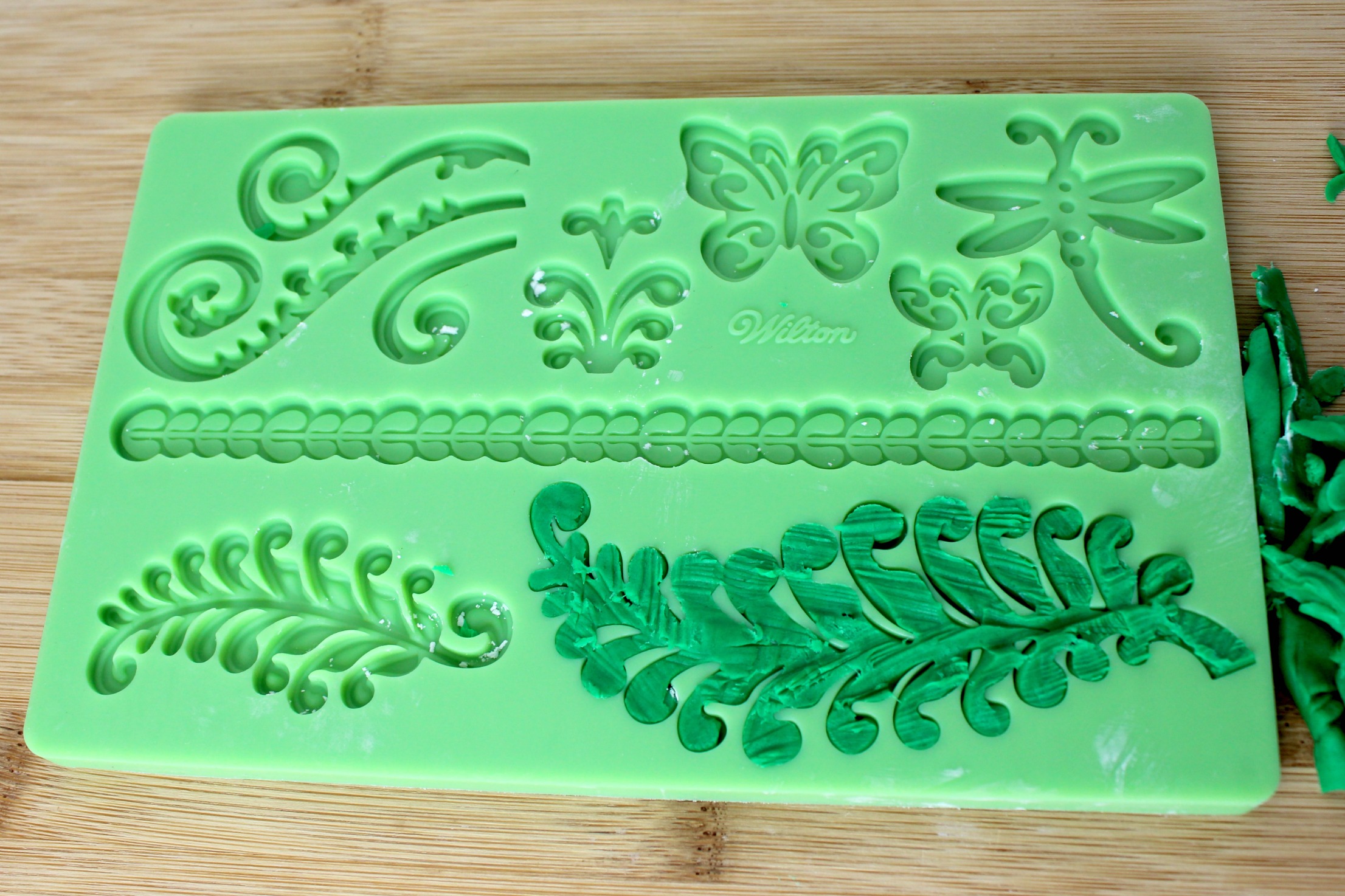 Finally, turn the mold over and pull the piece(s) out very gently. This process definitely had a learning curve and it took a couple tries before I was good at it. Pretty, don’t you think? 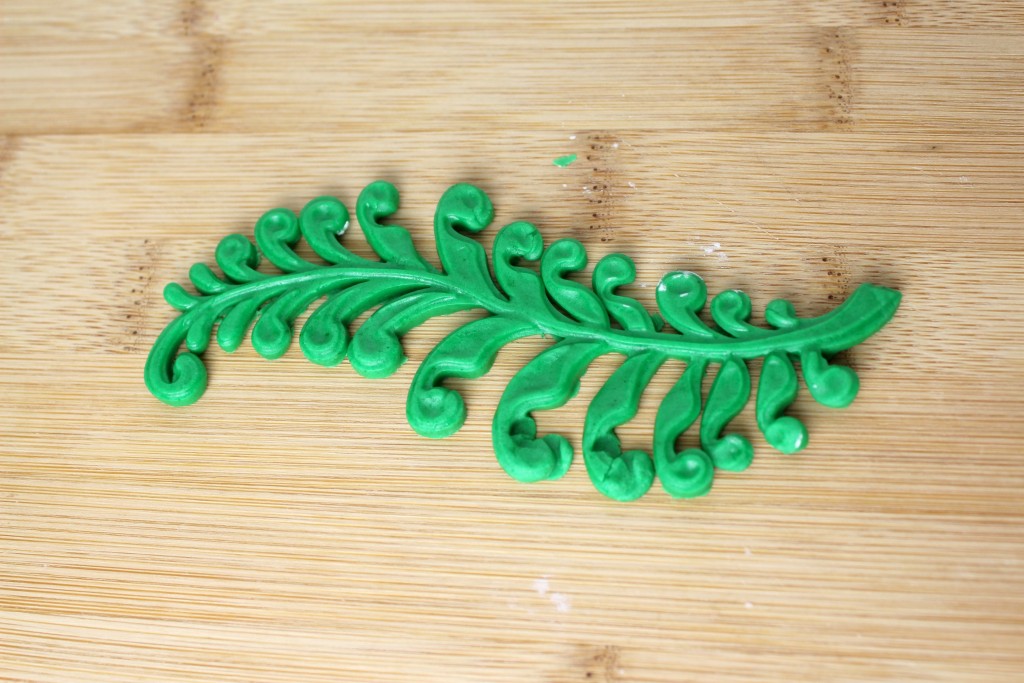 This is where it gets really fun!  Once I made enough fondant pieces, it was time to start decorating!  First I had to fix my little “oops”.  My simple solution was to make some extra fondant ribbon and wrap it around the white spot.  No one will ever know I messed up (shh…don’t tell)!  I wrapped more fondant ribbon around the bottom of both cakes. 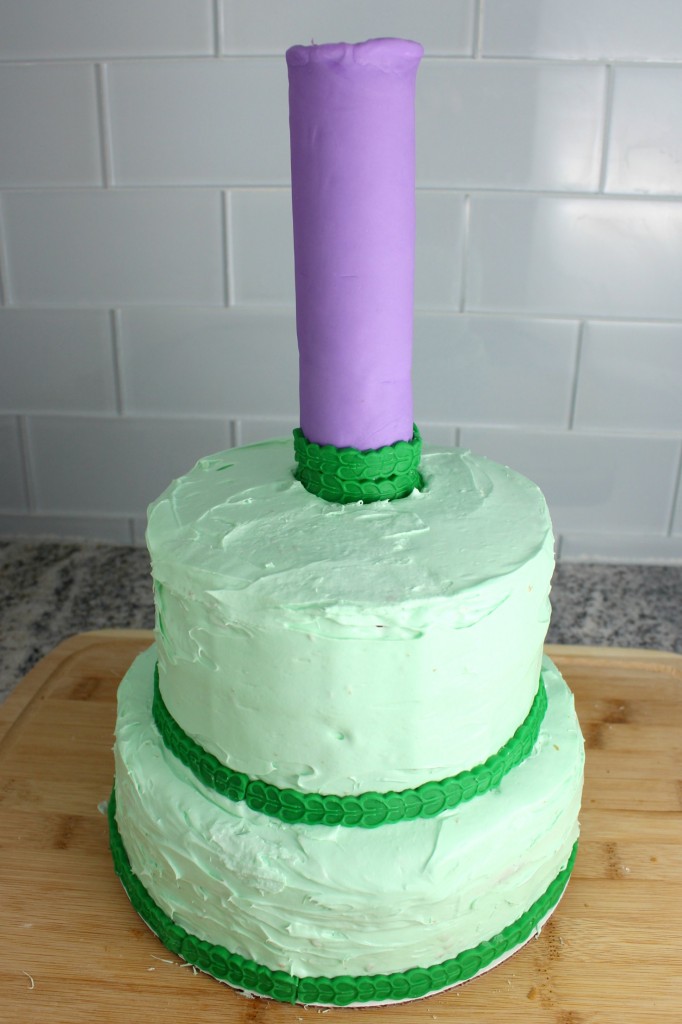 For the top of the Rapunzel tower, I took purple icing and frosted a cake cone.  Then I took more white fondant, colored it pink, rolled it flat and cut it into little rectangles for shingles.  I used the leftover purple frosting to stick the pieces to a sugar cone, starting from the bottom and moving up so there was a slight overlap, like shingles on a real roof. 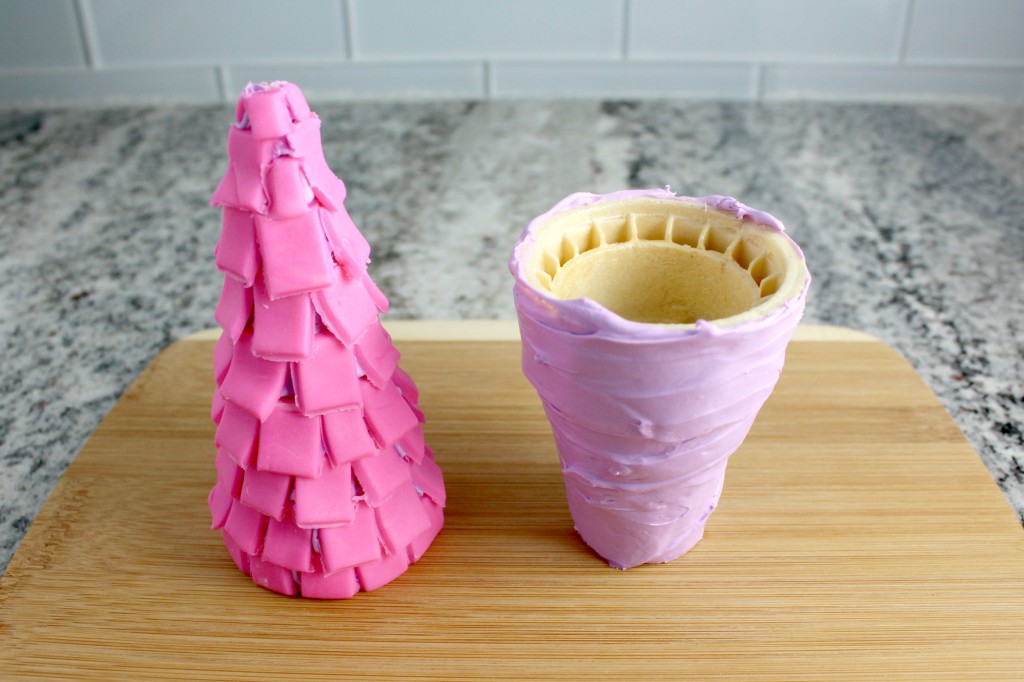 I added icing to the inside of the cake cone to hold the roof in place.  The sugar cone was the perfect fit for the PVC pipe and the icing held it in place as well.  When I was ready to make Rapunzel’s yellow window, I realized that I had colored the last of the fondant pink (another oops…don’t think I’ll be mistaken for a professional anytime soon).  I put on my thinking cap and found some yellow candy melts that I had stashed away.  I melted a few, using a cookie cutter in the shape of a Christmas stocking as a mold. Then I cut off the bottom, shaped it a little more and used that as Rapunzel’s window.  I suggest that you just remember to save some extra fondant…much easier!  Anyway, I stuck it on with some icing and surrounded it with vines and candy flowers. 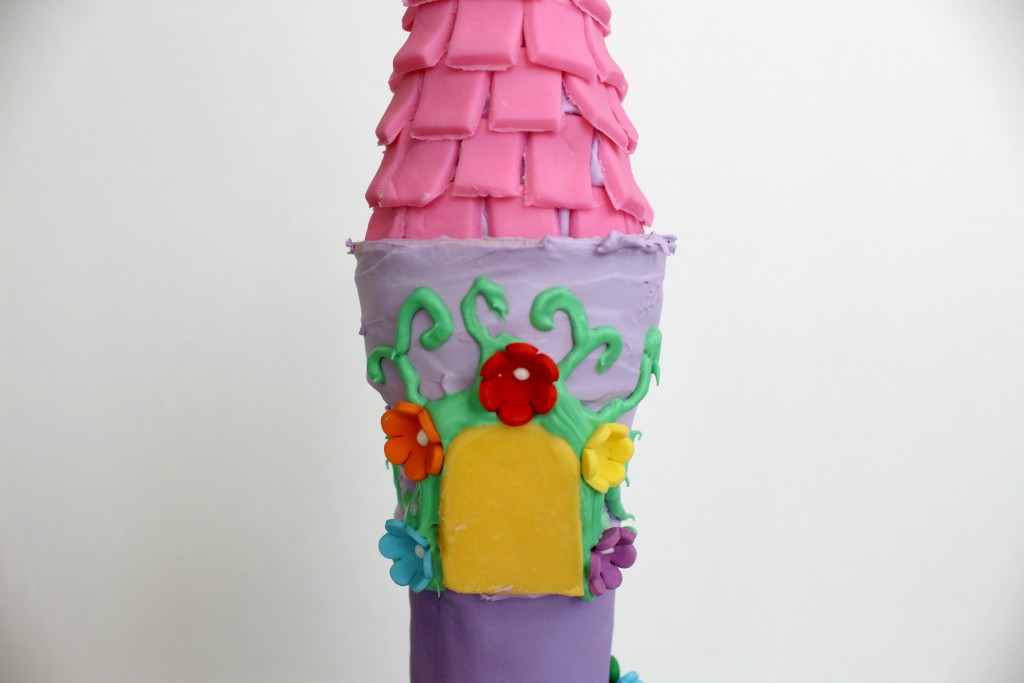 Then I just started decorating like crazy…it was so much fun!!!  I added greenery around the tower and a little lake with a waterfall. 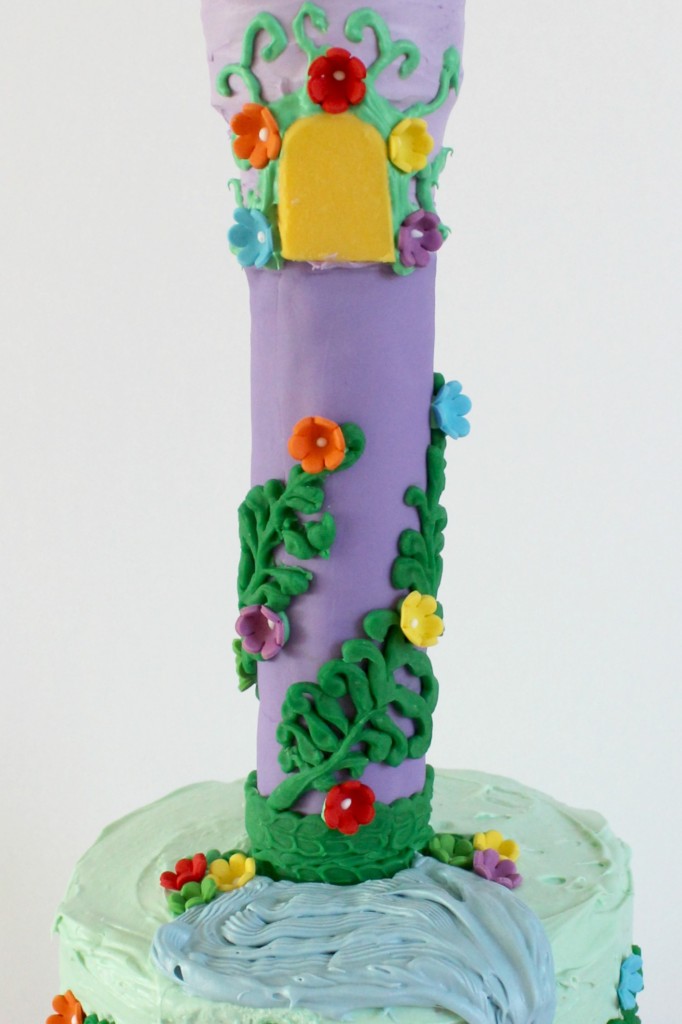 I kept adding greenery and flowers until I didn’t have any left!  If it’s a Rapunzel cake, you can’t possibly have too many flowers!  I also added some green coconut around the bottom for the grass. 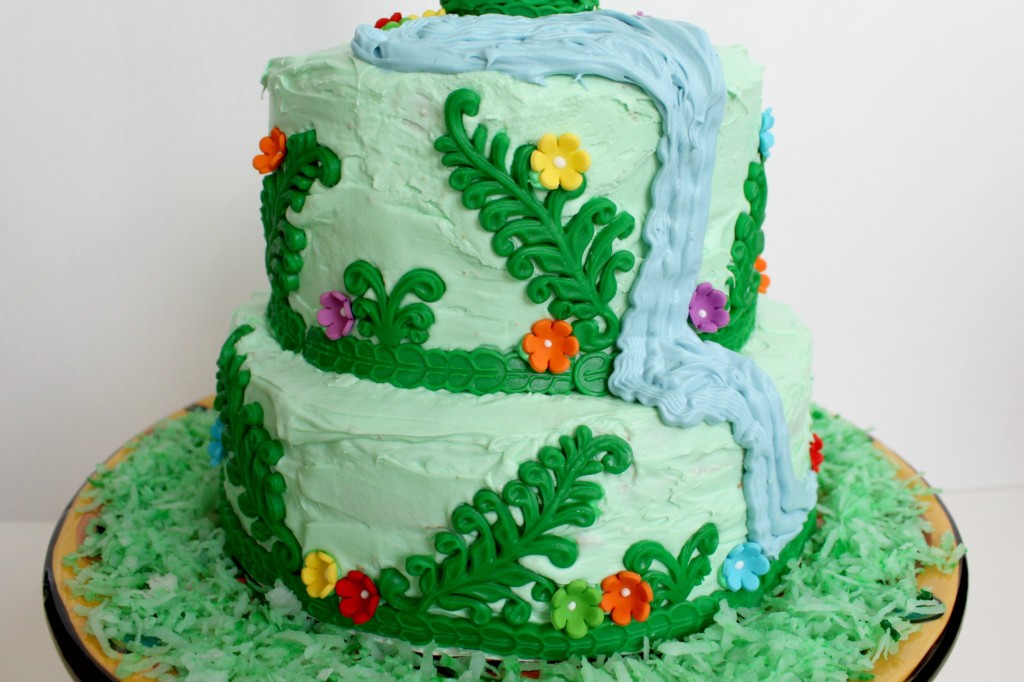 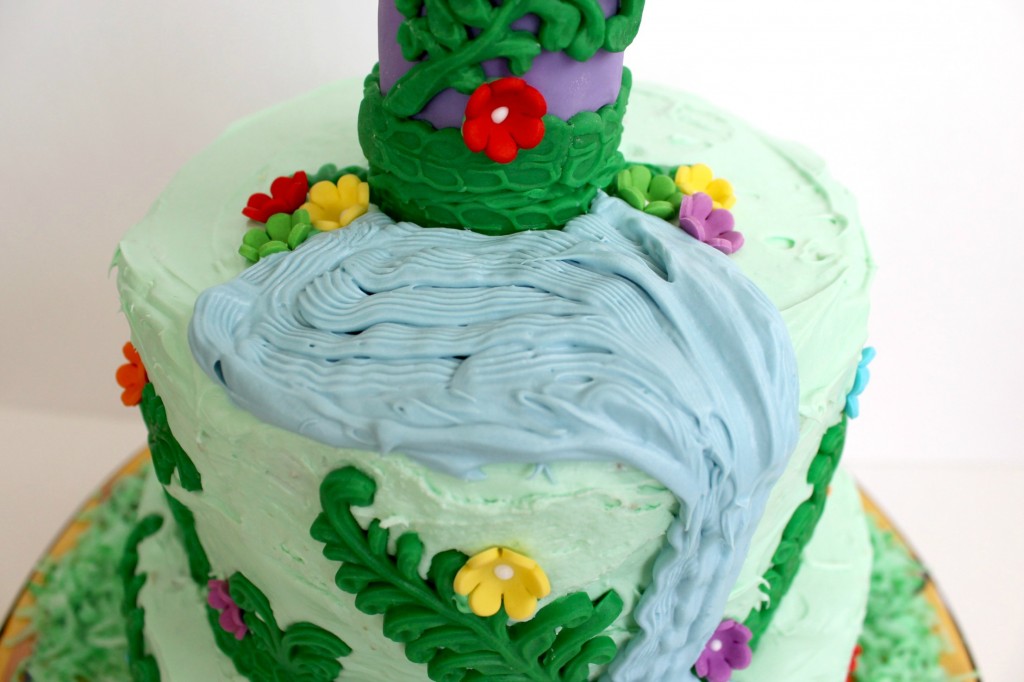 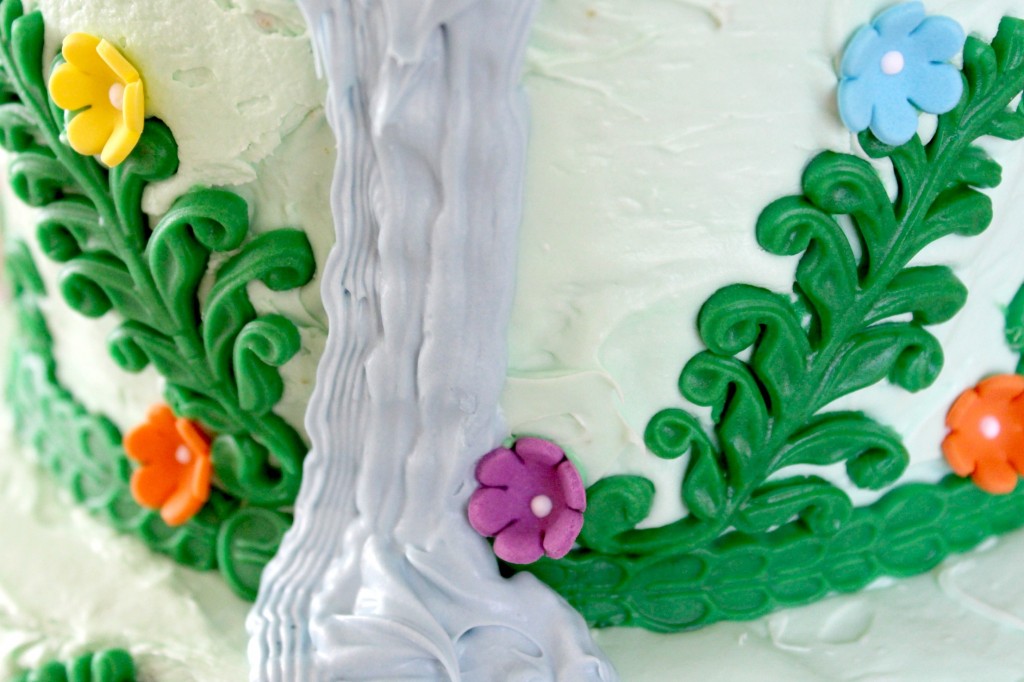 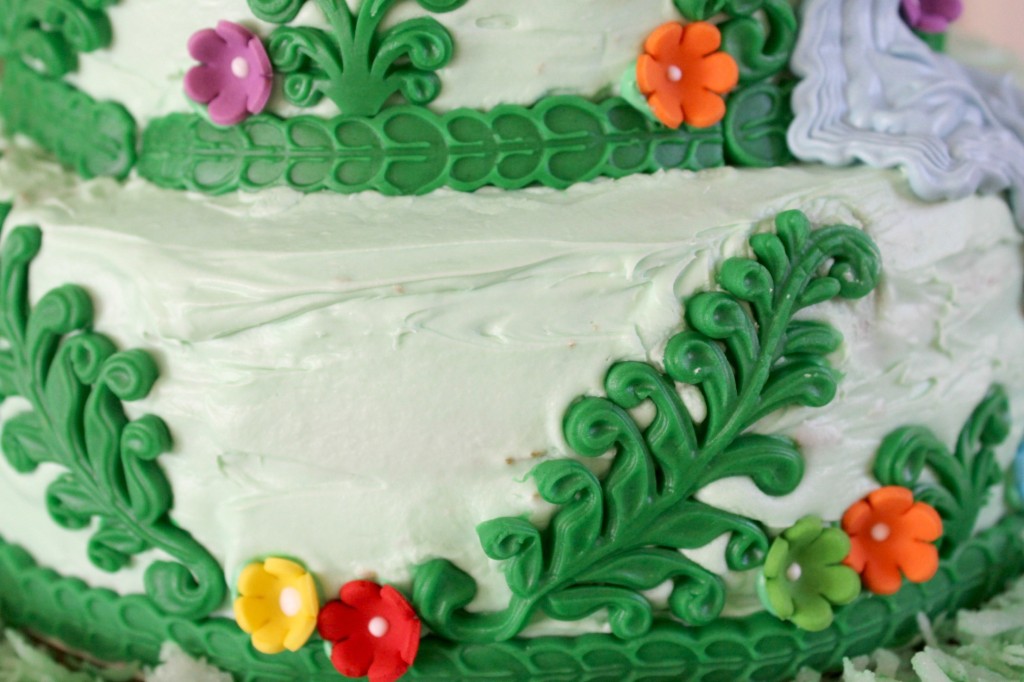 And the finished product… 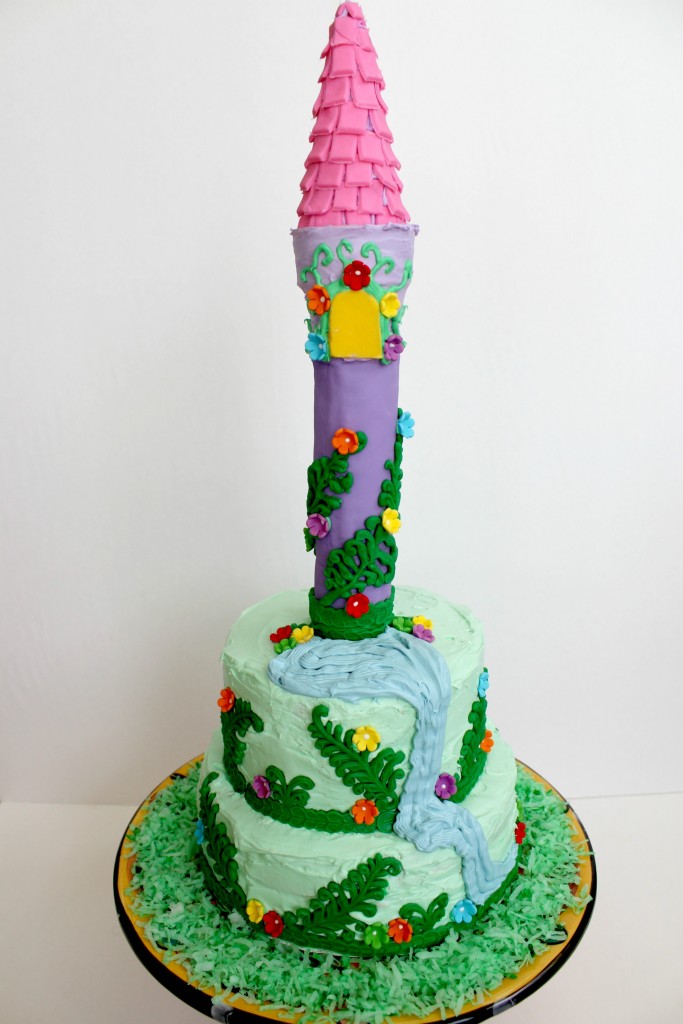 But wait…we almost forgot the guest of honor!  How could we not invite Rapunzel to her new home!  From the smile on her face, I think she likes it! 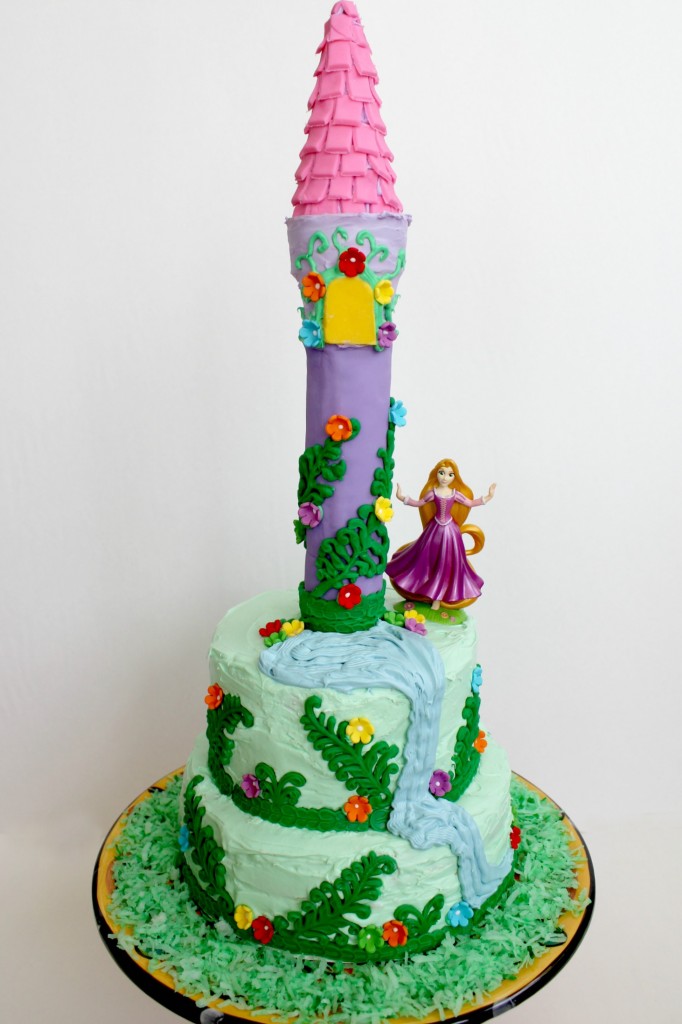 Finally, it had to past the ultimate test…did the birthday girl like her Rapunzel cake?  Well, she said it was the “coolest cake ever” so I guess I got her seal of approval! 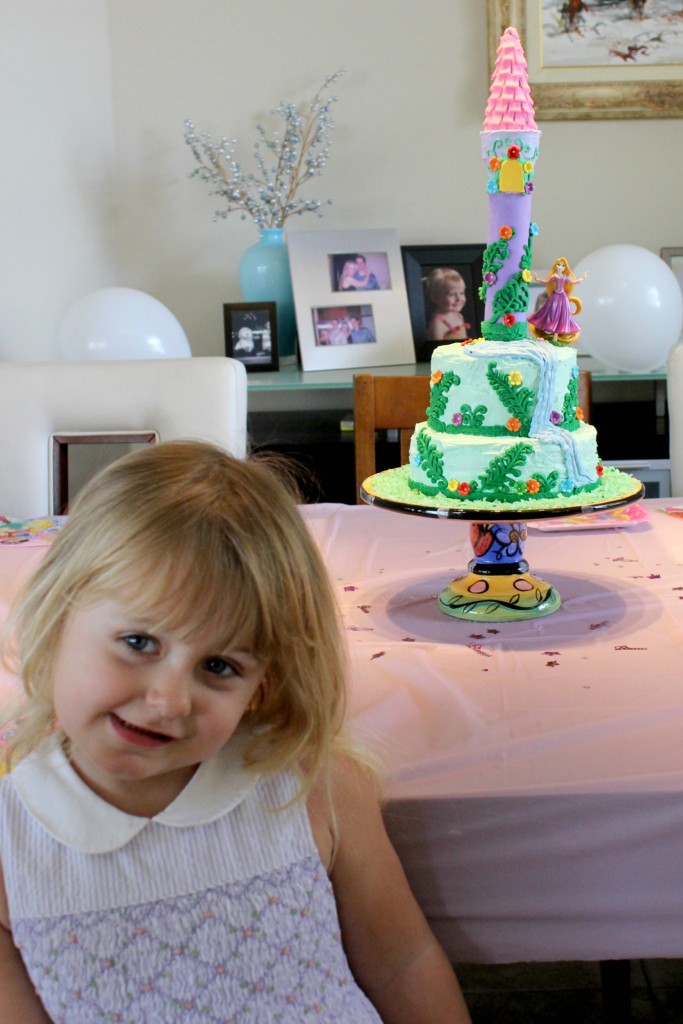 Now, if we could only get the same seal of approval for our singing! 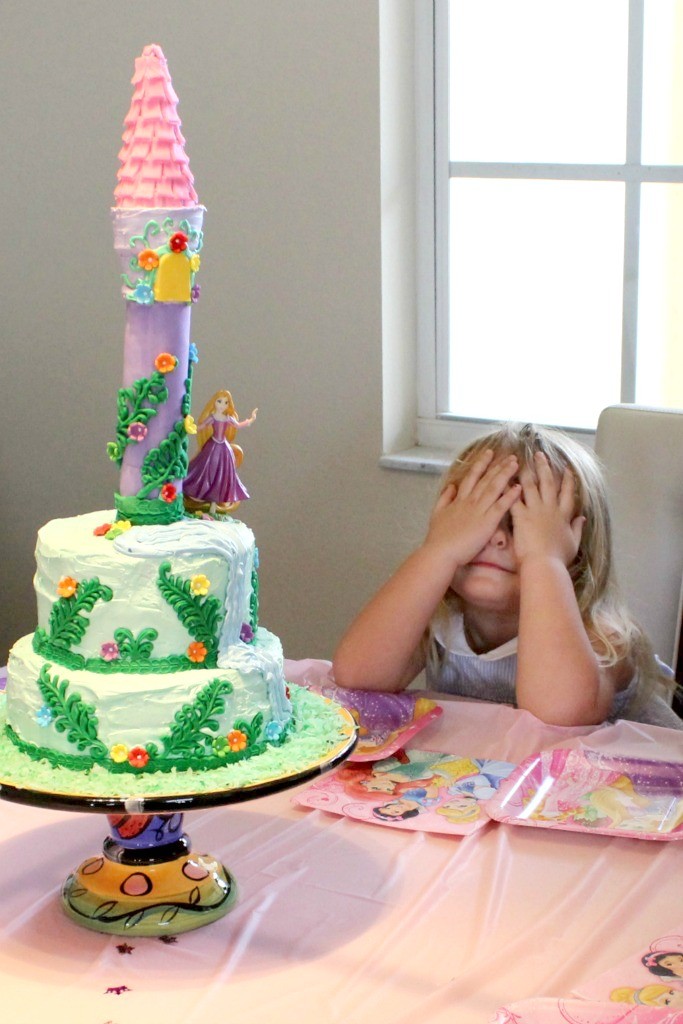 This Rapunzel birthday cake was so much fun that now I’m looking for any excuse to make another cake!  Any suggestions for what I should try next?  I’m up for a challenge!

For more fun birthday party inspiration, check out these posts: 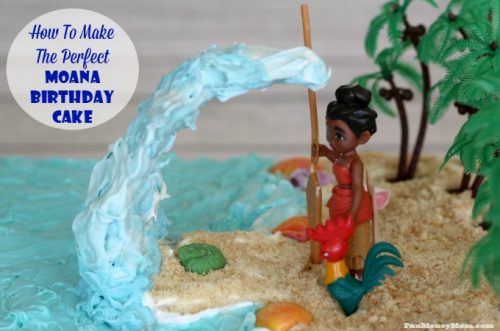 How To Make The Perfect Moana Birthday Cake 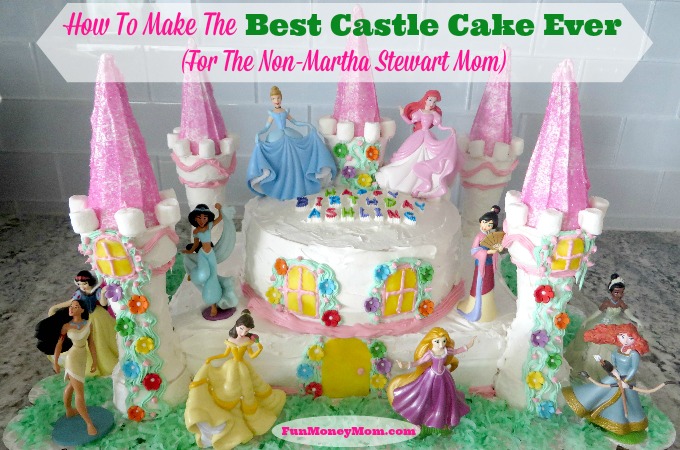 The Best Castle Cake Ever (For The Non-Martha Stewart Mom) 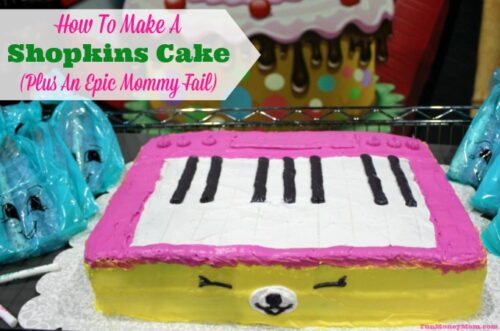 How To Make A Shopkins Cake (Plus An Epic Mommy Fail) 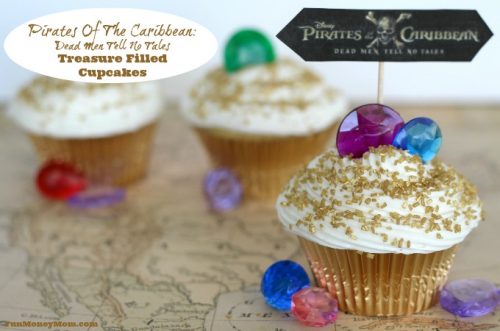