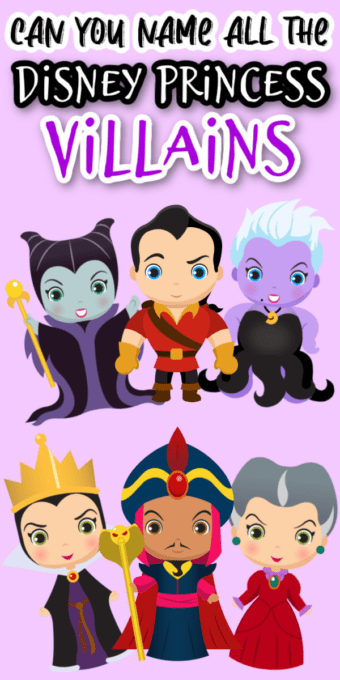 Disney princess villains are an important part of any Disney princess movie! I mean, they’re so awful that it just makes us root for our favorite princesses even more. From Malificent to Ursula, we’ve got the complete list of the villains that bring all the drama!

No Disney princess movie would be complete without at least one villain. Poor Cinderella and Moana even got stuck with several. The good part about it is that it just makes our happy endings even happier, right?

The Evil Queen, also known as Queen Grimhilde, was our first ever Disney Princess Villain. The character, inspired by the villain from the original Brother’s Grimm story, was originally Snow White’s mother. However, Walt Disney decided that she should be Snow White’s stepmother instead.

Along with Maleficent, the Evil Queen is one of the most popular of all the Disney princess villains.

Lady Tremaine (with Anastasia and Drizella)

Here’s a fun fact you probably didn’t know about Lady Tremaine (at least I didn’t). The actress that voiced Lady Tremaine, Eleanor Audley, was also the voice of Maleficent.

Not only that, listen closely next time you tour Disney’s Haunted Mansion and you’ll notice that she’s also the voice of Madame Leota.

Maleficent’s name is pretty appropriate, considering that in Latin it means evil-doing. The animators completed the look. The flamelike shapes of her cape were based on a Czechoslovakian art book, her horns were inspired by goat horns and the neck of her cape was drawn with bat wings in mind. I think she may be the scariest looking of all the Disney villains.

Fun Fact: When the sound effects engineer was looking for just the right sound to represent a dragon (Maleficent) breathing fire, he asked the army to send film of flame throwers in action. It turned out to be just the sound he needed and that’s what was used in the movie.

The next Disney princess villain was Ursula from The Little Mermaid. Disney originally wanted Bea Arthur to voice the character but her agent recommended against it and the part eventually went to Pat Carroll.

Ursula’s looks were inspired by the famous drag queen Divine. While at first glance she may look like an octopus, Ursula is actually a cecaelia, a mythical creature that’s part human, part octopus.

The next Disney princess movie to be released was Beauty And The Beast, starring my favorite Disney villain, Gaston. Though the movie is based on a classic fairy tale, Gaston’s character was created for the Disney version. Originally the villain was supposed be one of Belle’s female relatives…imagine how different that movie would have been!

Another major change was that Gaston was to have survive the fall at the end of the movie, getting eaten by a pack of wolves. That idea was scrapped but then later used for Scar in The Lion King.

Aladdin, released in 1992, introduced us to the villain Jafar. He’s loosely based the character on Persian vizier Ja’far ibn Yahya, though the main inspiration came from the 1940 film The Thief Of Bagdad.

Disney originally had Patrick Stewart in mind for the role of Jafar but he had to turn it down due to Star Trek obligations. Eventually the role went to Jonathan Freeman who has been playing Jafar in movies, video games and even on Broadway ever since.

When casting this Pocahontas villain, Disney originally planned to use Richard White as Governor Ratcliff. Since he was also the voice of Gaston, they worried that it might be distracting for the audience to hear Gaston from Beauty And The Beast as they watched the movie.

Ultimately he was replaced with David Ogden Stiers, who also happened to be the voice of Cogsworth the Clock in Beauty And The Beast. It IS a small world after all!

In the Chinese version of Mulan, Shan Yu was voiced by Jackie Chan. Chan even made a music video for the song “I’ll Make A Man Out Of You”. Apparently, he’s not only known for his martial arts abilities, he’s also well known for his singing in Asia.

The name Facilier is derived from the word facile, a French word meaning easy. It seems fitting since he was known for tempting folks to take the easy way out in life without having to earn it.

Fun Fact: In order to make Mother Gothel more relatable, Tangled creators interviewed female Disney employees and asked them what their own mothers did or said that annoyed them and made them feel restricted. The phrase “you’re getting kind of chubby” in the song Mother Knows Best came from these interviews. It seems that sometimes Disney princess villains come in the form of passive aggressive mothers!

If she looks familiar, it may be because Mother Gothel’s physical appearance was inspired by the singer Cher. She embodied the exotic, gothic look they were going for.

When the Brave DVD was released in 2012, it included a short film titled The Legend Of Mor’du. This short tells the full story of Mor’du the bear and how he became the villain that we see in the movie.

Te Ka, Tamatoa and the Kakamora

The coconuts that make up the kakamora tribe are almost too cute to be villains. Directors created the chase scene as an homage to the Mad Max films but if you look closely, you’ll see a reference to another Disney movie too. One of the kakamora looks just like Baymax from Big Hero Six.

Another villain from Moana was Te Ka, whose name means “fiery” in Polynesian languages. Towards the end of the movie, Moana touches her forehead to Te Ka, which is a traditional Maori greeting of mutual respect.

Finally there’s the evil crab Tamatoa. Lin Manual Miranda, the man behind the music of Moana, has said that the character and his signature song Shiny was inspired by musician David Bowie. Tamatoa is also a coconut crab, who are also known as robber crabs because they apparently like shiny things.

We love to hate them and our favorite Disney movies just wouldn’t be the same without the villains. From the Evil Queen to Gaston, it’s because of them we root for the princesses even more! Who’s your favorite Disney Princess Villain?

If you love the villains, you may like these fun finds…

If you’ve got a princess fan at home, these Disney princess room decorating ideas will make her feel like royalty every day.

These Disney Princess Coloring Pages are the perfect activity for a rainy day. 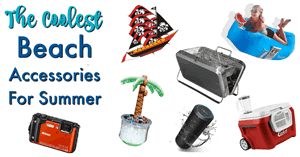 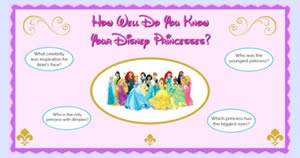 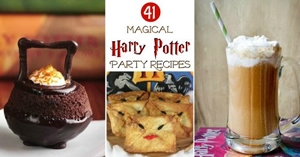