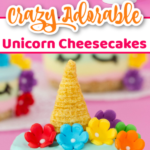 These unicorn cheesecakes might just be the most adorable bite size desserts ever! The best part is that these are no bake cheesecakes, so they’re super easy and as much fun to make as they are to eat!

I am all about the bite size desserts, especially when cheesecake is involved.  From no bake cheesecake bites to Oreo cheesecake, I can’t get enough! They’re perfect for all occasions, from party food to just a fun dessert to make with the kids.

This time I started out making no bake cheesecakes with a rainbow theme but then I got a little carried away. Once I saw the colored layers, it was just screaming to be turned into a unicorn cheesecake! I’ve made plenty of unicorn inspired crafts, like unicorn Easter eggs and an adorable unicorn pumpkin, but this was my first time making edible unicorns.

Not only did these turn out super cute but they were so easy! Grab the kids and let them help…they’re going to have SO much fun with this! 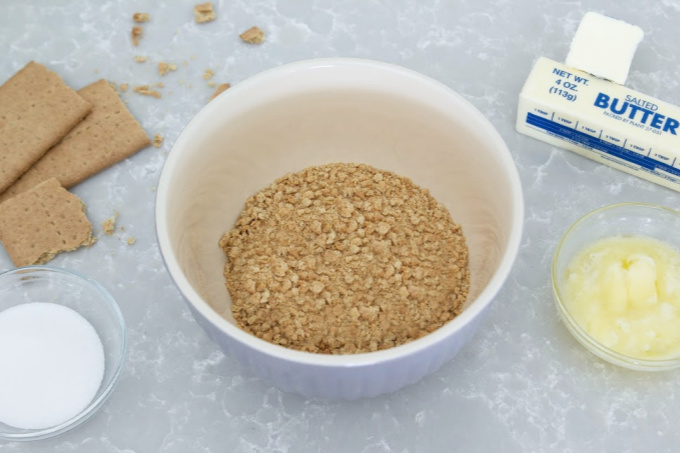 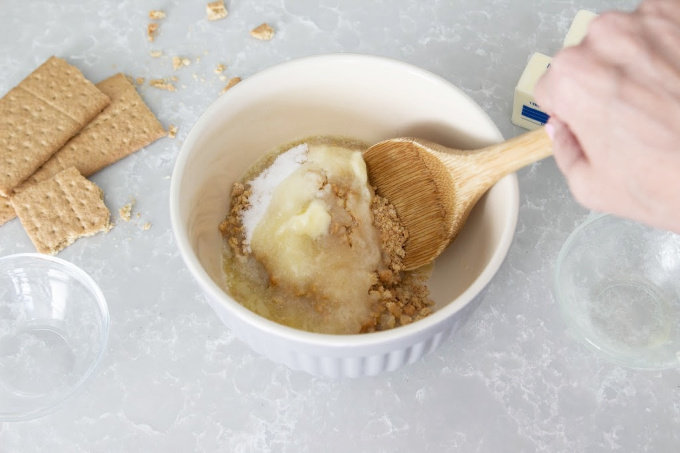 Spoon crust into each of the cheesecake compartments and press until firm. I used one of the removable bottoms from cheesecake pan but you can also use the bottom of a shot glass or even your fingers.

Just make sure the crust is firm so it’ll stay together when you take the cheesecakes out of the pan. Set aside. 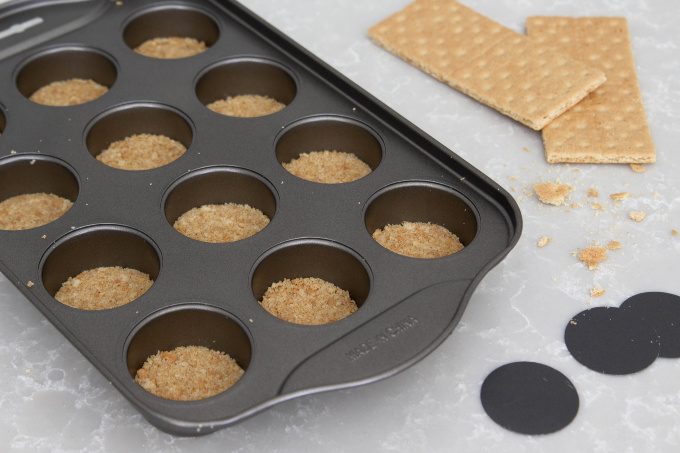 In a large bowl, combine cream cheese, sugar and vanilla and mix well with a stand or hand mixer. Set aside. 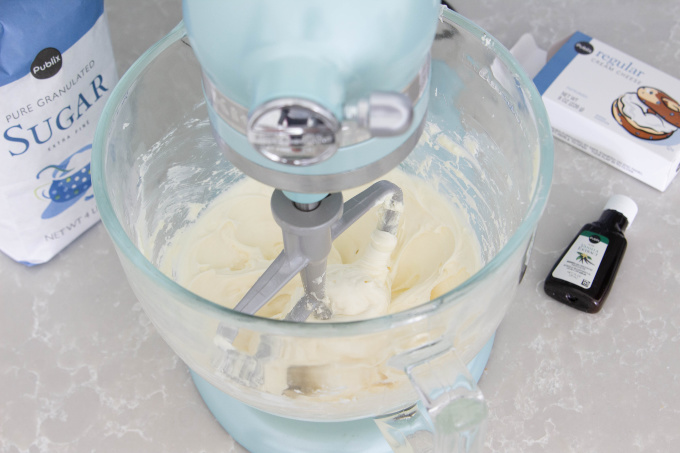 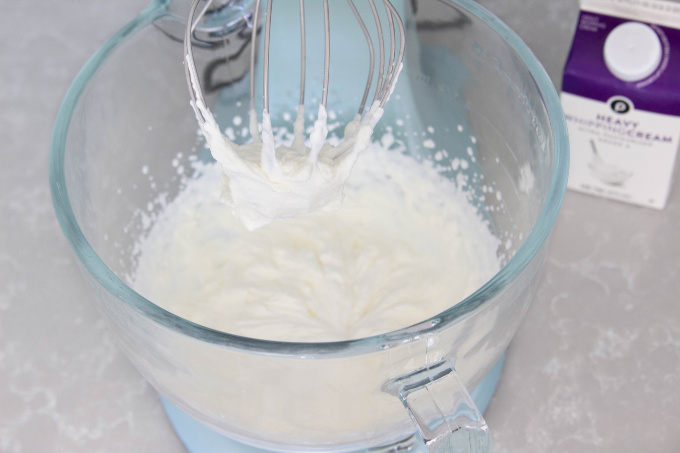 Divide cheesecake equally into four bowls and stir food coloring into each. 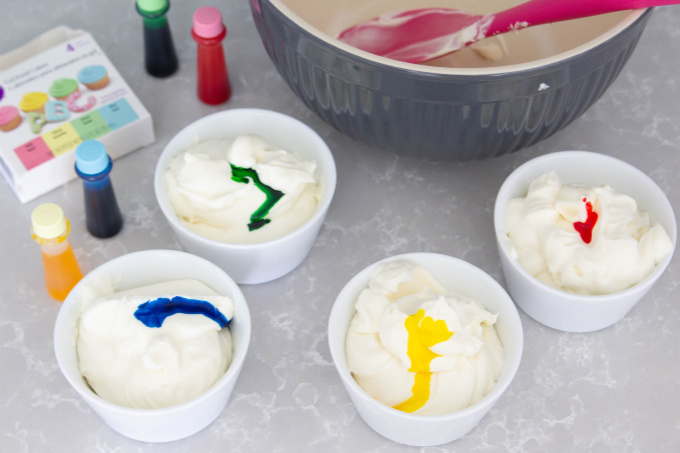 Mix until you get the colors just how you want them. I had to add to the yellow a couple times to get a brighter shade. 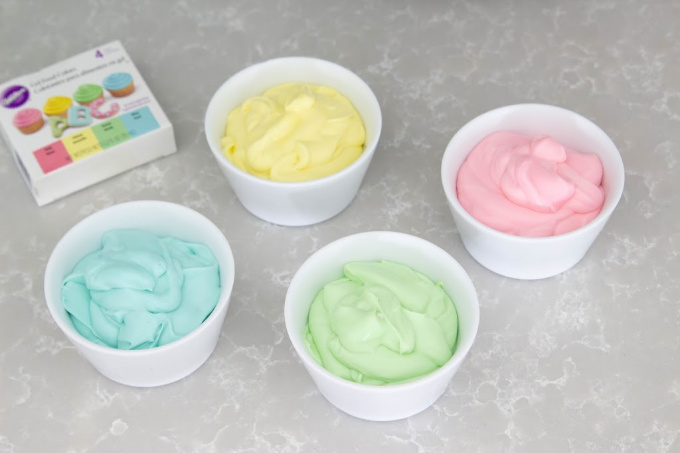 For these unicorns, I stacked the layers on top of each other. I started by adding pink to each mini cheesecake mold, then topping with green, yellow and blue.

Another alternative is to swirl the colors instead. Just be sure not to “overswirl” (if that’s even a real word) because if the colors blend together too much, they’ll start to look a little brown. If you’re making these with younger kids, this way may be easier for them. 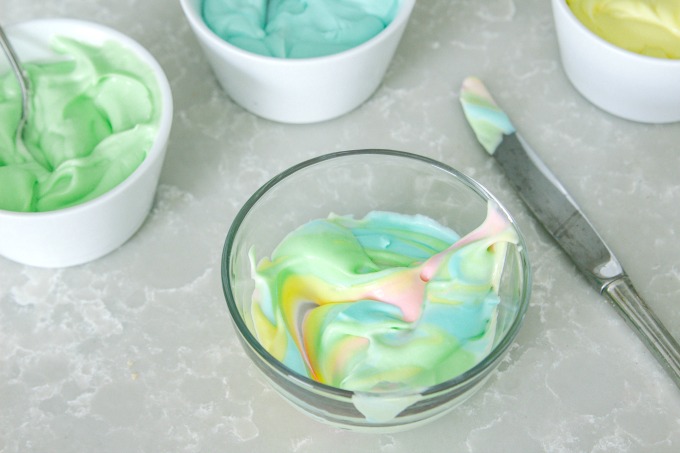 After removing the cheesecakes, use black decorating gel to make the unicorn eyes. You can make them using the tube, or for thinner lines, put some of the gel in a sandwich bag and cut off a small corner. 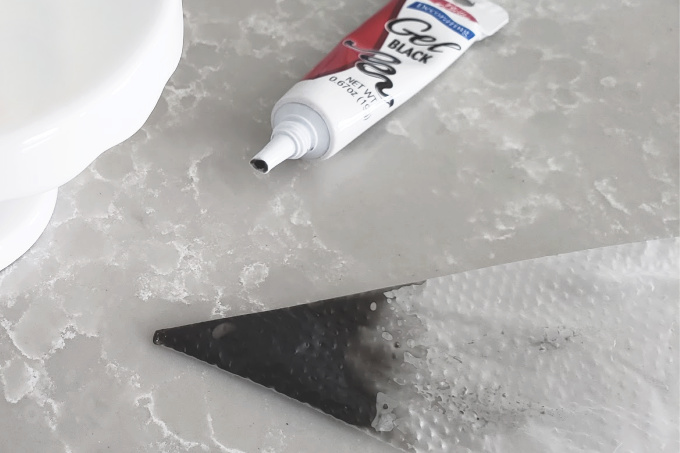 I found it helpful to practice one or two eyes before applying the gel to the cheesecake because it took me a couple tries to get it just right. I started with the tube but found I liked the thinner lines from the icing bag better. 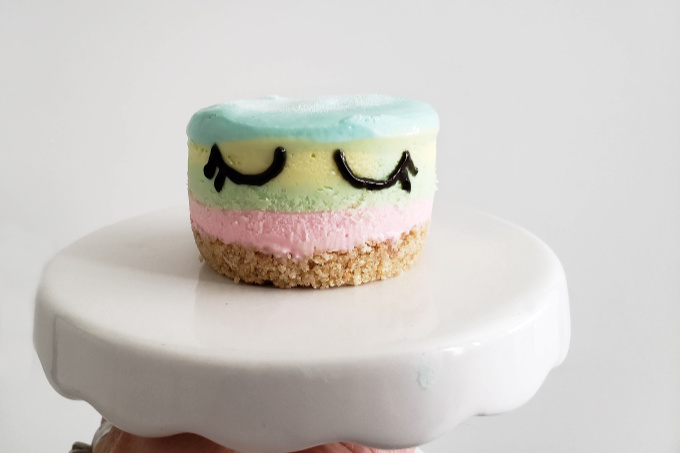 After making the unicorn eyes, place a Bugle in the center of each cheesecake. Finally, add 6-8 candy flowers, starting at the top and cascading down the side. That’s all there is to it! How adorable are these? 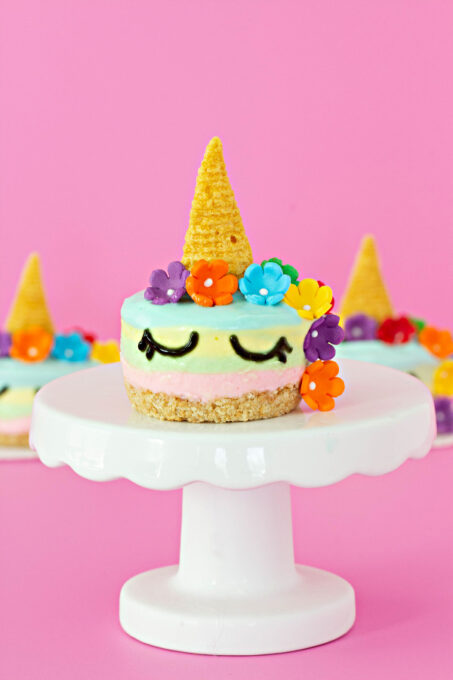 They’re almost too pretty to eat but I have a feeling that won’t stop anybody. 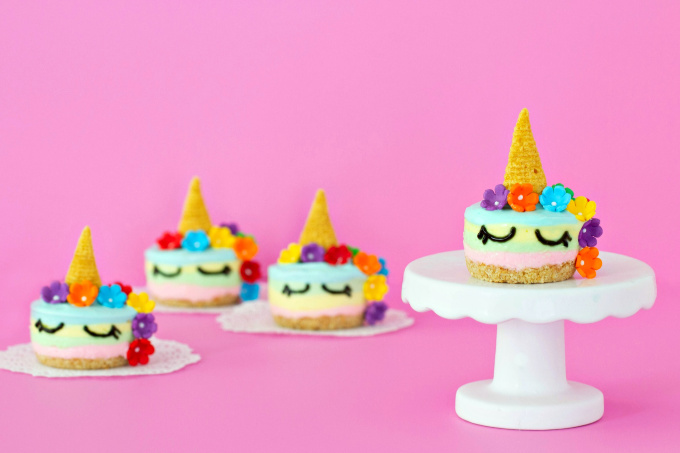 For The Unicorn Decor

As an Amazon Associate and member of other affiliate programs, I earn from qualifying purchases.

Does cheesecake need to be refrigerated?

Yes, cheesecake should be refrigerated until ready to serve.

Can you freeze cheesecake?

Yes. I regularly make the cheesecake mix and freeze it until I’m ready to serve it. This is especially helpful when I’m planning a party and I want to get as much done as possible ahead of time.

How do you freeze cheesecake?

There are a couple options for freezing cheesecake. If you want to freeze the cheesecake mixture for later, put it into a freezer bag and squeeze all the air out before sealing. For an extra layer of protection, wrap the bag in aluminum foil.

You can also freeze the individual cheesecakes by wrapping each one in plastic wrap, then wrapping again in foil. Be sure you’re just freezing just the cheesecake though. You won’t want to freeze the Bugles and flowers.

When you’re ready to thaw, these little ones don’t take much time. They’re usually soft enough to eat in about 15 minutes.

How long does cheesecake last?

Cheesecake will stay good in the freezer for up to a month, if wrapped correctly. It will keep in the refrigerator for 3-4 days.

How long can cheesecake sit out?

Cheesecake shouldn’t sit out for more than about two hours (but don’t worry…these will be gone WAY before then!) 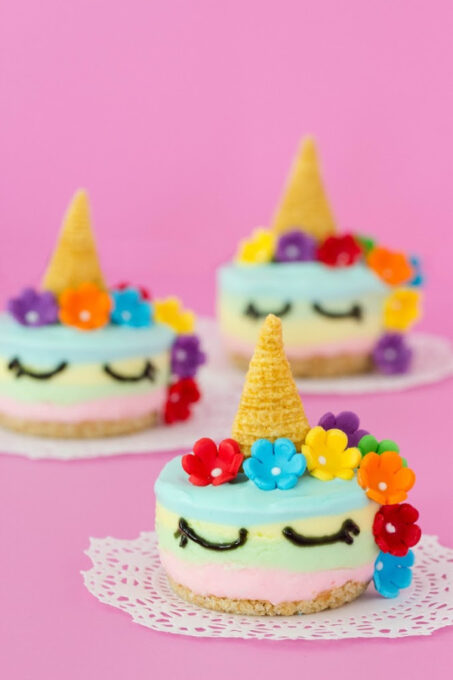 These unicorn cheesecakes are perfect for birthday parties or even just a fun surprise for the kids. They’re so adorable that they’ll be the hit of any gathering!

Looking for more fun ideas? You can’t go wrong with any of these bite size desserts… 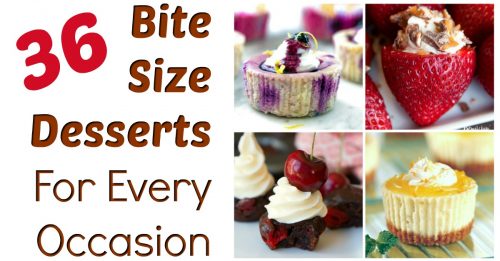 36 Bite Size Desserts For Parties And Other Occasions

Looking for my cheesecake ideas? These are some  of my favorites! 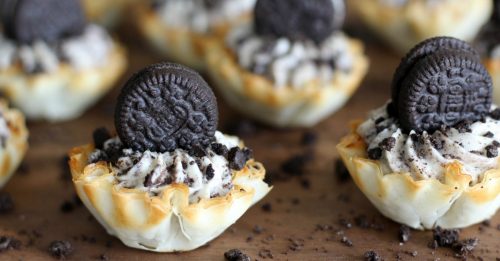 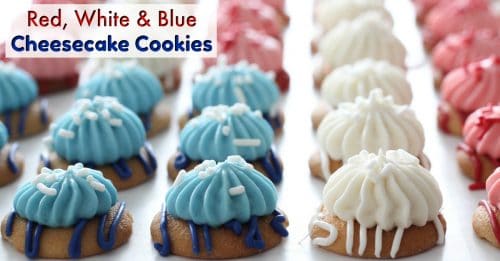 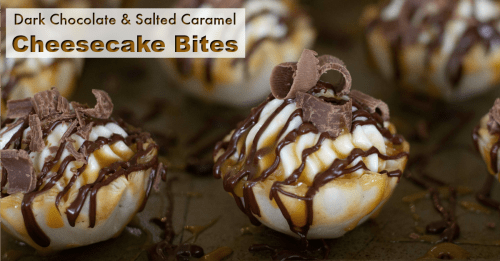